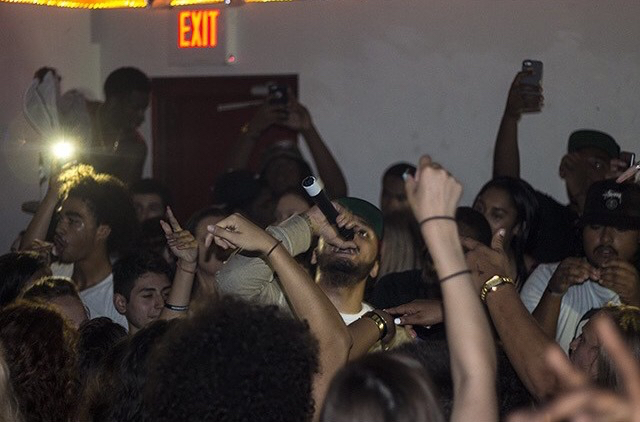 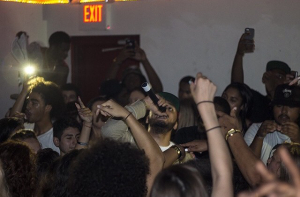 B. Ortiz turning up at a show

I admittedly spend a lot of time on SoundCloud, some may say a little too much time. But when I stumble upon good music, it seems worth it. When B. Ortiz‘s track “Euphoria” started playing I was instantly hooked. The instrumental was hypnotic, the bars relatable, the featured artists perfect.

“Euphoria” led me to more of tracks, and ultimately sparked some questions. I was able to ask these questions to the Wisconsin rapper recently. Check out the interview below!

B: IÔÇÖve always been an artist basically. Since I was real little. I started recording music at around 11. But basketball was what I really standing out in. We won the Wisconsin State Championship for Division 1 in high school. And I went on to play Division 1 basketball for Jackson State University. But while I was in college I started to get more noticed for my music, so it made it a little easier for me when I did decide to leave school cause I had a little back up plan. So basically started out as a hooper I was always into music, and then my music started to stand out. And I picked music before my basketball.

P: What inspired your verse on ÔÇ£Turn Up For You?” It seemed pretty heart felt?

B: Whenever I do music I try to rap about shit that really goes on in my life. I feel like you can hear in somebodyÔÇÖs music if theyÔÇÖre being genuine or not, so I try to go to the real storytelling route. It makes people feel the song more and itÔÇÖs more believable. I just got that got that from a past experience in my life.

P: The instrumental for “Euphoria” is smooth and futuristic how did you link with the producer for this cut?

B: Yeah thatÔÇÖs my guy Pdub The Producer. I linked up with him once I started doing the Dussy mixtapes with my guy Ted Park, shoutout to Ted Park. He introduced me to Pdub The Producer, and I threw a couple of tracks down with his beats and heÔÇÖs liked me ever since then. So weÔÇÖve just been sending things back and forth. And when I heard that one I knew I had to do this song. Shoutout to Pdub too.

P: In addition to Pdub The Producer, how did you link up with Sierra DeMartino and Trapo who also contributed to the track?

B: Sierra and Trapo are both from Madison, where I grew up, Madison, Wisconsin. So Trapo was already on the up and coming with his music, he has kinda like a soulful drill music but linking up with him I could just hear him on the verse. When I had the rough draft I knew I had to get Trapo on it just by the vibe and shit. And Sierra I knew her through a friend in Madison, and she had never been on a song but I had heard voice before. So I just decided to get her in the studio and that ÔÇ£EuphoriaÔÇØ joint was actually the first time she ever recorded in the studio. Shoutouts to her on that joint. ┬á

P: Right now the track has about 36K plays, were you expecting it to get that much love?

B: When I made it I canÔÇÖt say I expected it to do that well but I was really looking for a follow up to the ÔÇ£SomebodyÔÇØ (Remix) cause that shit did crazy numbers. Shoutout to Toni Romiti for pushing that, helping me promote that and shit. I was really looking for a follow up just to show people that I didnÔÇÖt need a co-sign to be out here doing big numbers or whatever. And once I heard the track, the rough version of the track with just me and Sierra I knew it was gonna be a hit. And just to add Trapo on it, I knew that that would boost it up too cause his crowd is going crazy right now. So I didnÔÇÖt think it would do that well, but IÔÇÖm definitely happy with the direction itÔÇÖs going.

P: Your track ÔÇ£RideÔÇØ ft. Reeks is smooth song to bump to in the whip. So I wanted to ask you what songs you listen to when your riding?

B: Right now IÔÇÖm listening to a lot of Supa from HurtEverybody, he from Chicago. Also when IÔÇÖm riding around you already know, you could never go wrong with some Future. One more thatÔÇÖs real heavy in my rotation now, I fuck with Young Sizzle, Southside from 808 Mafia. I just got put on to his rapping so IÔÇÖve been rocking with him too when IÔÇÖm riding.

P: You have a track called ÔÇ£NostalgiaÔÇØ featuring┬á3rd Dimension. What are a few things that make you feel nostalgic?

B: Well, I smoke a lot of weed so whenever I be smoking like late at night or if IÔÇÖm by myself or something thatÔÇÖs the main that I be thinking back, having nostalgic thoughts. But itÔÇÖs most of the time when I get high to be honest.

P: On your track ÔÇ£Put Me OnÔÇØ you say the line, “Used to pay producers, then I started making beats now I own my shit.” I see most of your recent work has been produced by other people, what prompted that change? And do you plan to go back to self-producing? ┬á

B: When I started making music when I was about 11 to 15 I just have to use other peopleÔÇÖs beats or would have to pay for beats. My self-producing simply came from me not wanting to pay people for beats. So I put out a few songs with my beats and I got great feedback of it. It was doing good ass numbers back when I was putting them out. And then after that I just had a bunch of real producers sending me work. And telling me ÔÇ£Yeah you could just use this one for free cause it would be good for the both of us.ÔÇØ As of lately, itÔÇÖs just been easier for me to access free beats and thatÔÇÖs why I havenÔÇÖt necessarily been using my own beats as my singles. But I will get back to producing a lot more of my tracks, but I will also be, IÔÇÖm not going to close out all the producers. But at the time, when I made ÔÇ£Put Me OnÔÇØ it was just where I was at in my music career.

P: On ÔÇ£Put Me OnÔÇØ you also say the line, ÔÇ£Cause we could be on but don’t nobody know where we atÔÇØ I see that youÔÇÖve recently moved from Wisconsin to Florida is that line part of the reason?

┬áB: Yeah I mean wherever I go, Imma always gonna continue to put on for Wisconsin cause I feel like most of ┬ámy life was spent there, like the important years were spent there, the years that molded me into a person were spent there. So IÔÇÖm always gonna continue to rep Wisconsin. But yeah as for that line, itÔÇÖs like we could be on because of the talent. People really donÔÇÖt know but Madison really has kids that are really out here making moves right now, like big moves. But itÔÇÖs just hard because thereÔÇÖs nobody, you canÔÇÖt get any management out there. You canÔÇÖt network with anybody hip-hop wise out there. ItÔÇÖs just a real tough community to push your hip-hop artwork just simply because of the type of people that live there. But it definitely did factor into my move, just being able to network better in Florida, having better hip-hop connections and all that. But I definitely continue to continue to put on for Wisconsin wherever I go.

P: On your track ÔÇ£Be SomebodyÔÇØ (Remix) and of course ÔÇ£EuphoriaÔÇØ you link with female vocalists. What motivated you to do so? And in terms of more mainstream female artists that are out right now who would you want to collaborate with either now or in the future?

B: What motivates me to collab with female artists is just cause a majority of my tracks are I wouldnÔÇÖt say are for women, but a lot of them have women as the base of the plot just simply because I like telling stories with my music, real stories. It kinda always adds to the mystique of the song when you have a female vocalist on there. I think it gives it a sorta classic feel if you get the right artist on the right track. And female artists that I wanna work with in the future, IÔÇÖll definitely rock with Dej Loaf. To me sheÔÇÖs the hottest female rocking out here right now. All around I really wanna work with SZA, sheÔÇÖs fucking dope. And if I could, I know sheÔÇÖs an OG but if I could ever get up there I need a collab from India Arie, off the top definitely.

P: What prompted you to say India Arie?

B: Just simply cause her and like Jill Scott like their whole. I canÔÇÖt really say that I want to recreate that sound but just having somebody that soulful on one of the tracks or any track that I would have would just be crazy cause just listening to Jill Scott and India, just even from back in the day is what prompted me to go this route with my music. With more of the realism and talking about relationships in songs and stuff like that. Early 90s music really, I just feel like it would be really cool to bring that sound back.

P: Going off of that answer I noticed that on ÔÇ£SomebodyÔÇØ you sampled Aaliyah is that part of the reason you did that?

B:┬áYeah, I listen to a lot of old stuff like I said. So I knew that this was gonna be one of my first official singles that I was gonna drop so it wasnÔÇÖt a bad idea to pick a sampling song that a lot of people would know where it came from being that Aaliyah was a huge artist. I knew it would be fresh enough for the people, even my age, that they would know that song. And obviously I just liked the song, for awhile, IÔÇÖm just intrigued by anything 90s really.

P: Your track artwork is pretty dope. How does it come together? Do you work with one person?

B:┬áI work with a few artists. I do work with two main artists out of Wisconsin. Shouts out to Josue Salazar and Kasey Kuchenbecker, Kasey K, when I do have artworks I work with them too. So shouts to them, theyÔÇÖre definitely mad creative. I try to keep it more in-house, all people from Wisconsin or whatever. Yeah itÔÇÖs pretty dope.