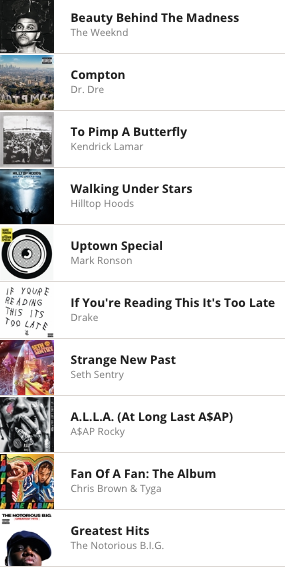 America came out on top with five of the top 10, two from Canada, two local Australian releases and one from the UK. The Top 5 in particular all sold well in Australia, reaching at least gold certified status (which in Australia is 35,000 units).

The Weeknd, with his late August release Beauty Behind The Madness, topped the Urban Album Charts, and the Canadian artist is now platinum in Australia at 70,000+ sales. Dr. DreÔÇÖs long awaited Compton album came in at number two (gold in US, platinum worldwide), just ahead of Kendrick LamarÔÇÖs To Pimp A Butterfly that was released almost half a year earlier in 2015. Dr Dre and now Kendrick Lamar are well established throughout Australia, having a mixture of young and old fans alike and their back catalogues continue to sell well, too.

AustraliaÔÇÖs Hilltop Hoods with their mid-2014 release Walking Under Stars came in next at fourth. This release also reached number one in the 2014 ARIA Urban Album charts, number nine overall of all albums for 2014, as well as reaching #23 in New Zealand. The Hilltop Hoods’ domestic popularity in Australia is underscored, with five albums in the Top 40 Urban Album charts for 2015.

Mark RonsonÔÇÖs Uptown Special sold well in Australia and rounds out the five urban albums that reached gold sales in 2015. His international smash single “Uptown Funk” feat. Bruno Mars is still on heavy rotation throughout Australia.┬áDrakeÔÇÖs commercial mixtape If YouÔÇÖre Reading This ItÔÇÖs Too Late, failed to sell as well as it has done in America, UK, Canada or Europe, however still ranks in AustraliaÔÇÖs top 10 best selling urban albums for 2015.

A$AP RockyÔÇÖs A.L.L.A. (At Long Last A$AP) peaked at number 5 overall in the weekly general ARIA album charts, and finished the year just inside the Top 100 Overall Albums. This is A$AP RockyÔÇÖs highest charting release in Australia to date.┬áSeth SentryÔÇÖs Strange New Past received the ARIA for Best Urban Album of 2015 from Australia. It sold very well despite being released halfway throughout the year, and is Seth SentryÔÇÖs highest charting release to date.

Chris Brown and TygaÔÇÖs joint effort in Fan of A Fan: The Album sold well, peaking at number 3 and finishing at number 9 on the ARIA Urban Album charts in 2015, proving to be very popular down under.┬áThe Notorious BIG Greatest Hits, released way back in March 2007, is still selling strong and rounds out the top 10 Urban albums for 2015 in Australia. This release continues to sell well in 2016 and may yet chart again.

The popularity of urban music in Australia has been gaining popularity at a steady rate, and current trends would suggest that this will only continue over the years to come.