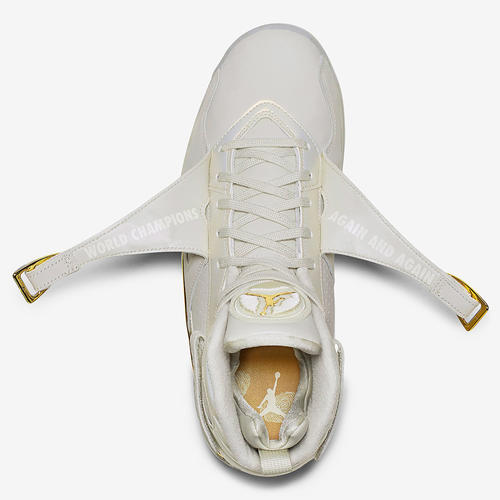 In light of the NBA Finals coming to an end with King James finally bringing the city of Cleveland their first championship in the history of the NBA, Ohio is not celebrating alone. This weekend [June 25] the annual Air Jordan ÔÇ£Cigar and ChampagneÔÇØ Championship Pack will be released in two new colorways.

In 2015, the Jordan Brand gave us the Air Jordan 7 as part of the Championship Pack. This year we will receive two versions of JordanÔÇÖs eighth signature shoe. This yearÔÇÖs Championship Pack models the pair Jordan wore during Game 6 of the 1993 NBA Finals against Charles Barkley and the Phoenix Suns. This was also the game that secured JordanÔÇÖs first 3-peat, in which he went on to win another three consecutive NBA Finals in 96, 97 and 98.

The Air Jordan 8 Championship Pack includes the Champagne colorwayÔÇöan all white Light Bone leather pair with gold plated side panels and accents. The gold panels feature fingerprints that represent Michael Jordan and his Chicago teammates passing around the 93ÔÇÖ Championship trophy in celebration. In addition, the insides of the straps have printed the phrases┬áÔÇ£WORLD CHAMPIONSÔÇØ and ÔÇ£AGAIN AND AGAIN.”

The Confetti colorway is an all black leather pair with a colorful confetti design on the side panel and the mid-sole. It also features the “WORLD CHAMPIONS” and “AGAIN AND AGAIN” printed phrases.

The 2016 Championship Pack is to be released on June 25 and each pair is running for $250. DonÔÇÖt miss out!