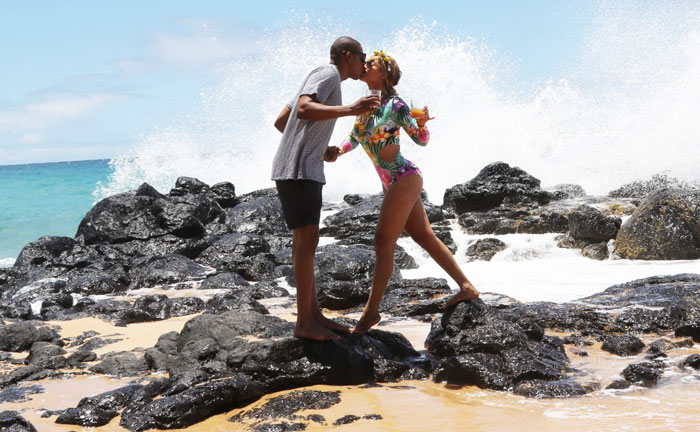 Queen Bey is getting in some relaxation. The singer took some much-needed time off with her family while on a break from the “Formation World Tour.”

Mrs. Carter shared images from a recent Hawaii getaway, featuring Jay Z and their daughter, Blue Ivy. The parents looked happy on the beach, kissing and sipping Ace of Spades, while their 4-year-old baby girl played in the sand.

Of course, Bey also made waves with her fashion. In the photos, she’s donning LEMONADE-inspired accessories, including a Dolce&Gabbana headband and necklace.

The Carters also enjoyed a bike ride through paradise. Bey pedaled in style in a hat and colorful dress and Jay Z kept it gangsta with a bandana around his mouth, while Blue Ivy rode in the seat behind him.

She might be enjoying some down time, but Queen Bey is back on the road next week. On June 28, the European leg of her tour kicks off at Stadium of Light in Sunderland, England. She will be touring through Europe until Aug. 3 before returning to the U.S. in September.