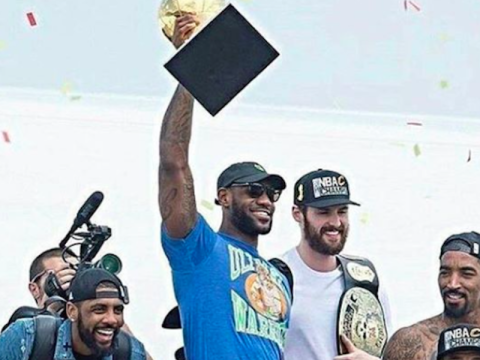 Turn Up Tuesday. It’s a day to turn up SOHH why not get things going with Cam’ron still getting it in Ohio? With the Midwest on your mind, what about LeBron James throwing a little bit of shade at the Golden State Warriors? With the NBA season over, everyone’s in vacation mode – including Jay Z and Beyonc├®? All this coming up in SOHH Whatcha Think.

If there’s ever been anyone who has shown love to the Midwest without being from the Midwest, it’s gotta be Cam’ron. No one really knew he was getting it out there until 2009 when he dropped “I Used To Get It In Ohio” and how fitting for the Cleveland Cavaliers to come up big with the NBA Finals win? Cam’ron’s Instagram is on it:

Are you feeling Cam’ron’s ode? Anyone else keeping this song on repeat? Think Cam should go to the parade? #SOHHWhatchaThink?

2. The Shade Is Real

Just when you thought the WWE moments would end with Kevin Love reppin’ Stone Cold Steve Austin with a post-NBA Finals Austin 3:16 shirt on, LeBron James went the extra mile with his own wrestling moment. Or is there some major shade being thrown? The Cavs’ IG is on it:

Do you see the shade? Are we all overreacting? Who do you think is the marketing genius behind that shirt? #SOHHWhatchaThink?

While all of the attention normally goes to Kanye West and Kim Kardashian, Jay Z and Beyonc├® continue to let their work and high-profile achievements speak for themselves. With that being said, it’s great when we see them finally get a break and do things ‘normal’ people do like go on vacation. Baller Alert has them relaxing:

Are you feeling the Carters in vacay mode? Are they the most underrated super couple in entertainment? Can we finally admit they will never divorce? #SOHHWhatchaThink?