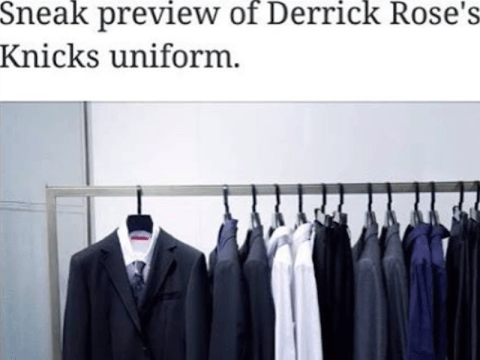 NBA Thursday. It’s the NBA Draft tonight SOHH why not get things going with some basketball? How about ex-NBA star turned social media addict Gilbert Arenas ripping the Chicago Bulls for giving up Derrick Rose? Speaking of the D-Rose trade, should Knicks fans be very, very, very concerned? With all of this NBA talk on your mind, are you ready for President Obama to own a team? All this coming up in SOHH Whatcha Think.

Are you loving the D-Rose trade? If you’re a Knicks fan, there is no way you can ignore the potential it could have for the city. But if you’re a Chi-Town fan? Yelp? Gilbert Arenas has something to say:

Did Gilbert go too hard? Is he just keeping it 100? Think the Bulls gave up a lot for little in return? #SOHHWhatchaThink?

As quick as we are to clown the Bulls for the trade, it’s no secret D-Rose is prone to injuries. Almost every season. He has won the MVP in past years but even that’s overshadowed by him riding the bench due to health problems. Instagram has a friendly reminder for the Knicks:

Anyone else ready to see how this works? How about that ambulance one though? Could D-Rose lead the Knicks to a championship run? #SOHHWhatchaThink?

It’s no secret how much President Barack Obama loves basketball. He’s a Chicago Bulls fan, obviously, and with his months in office nearing, could he be ready for a new challenge? Baller Alert is on it:

Do you think this would really go down? Are you ready to see President Obama run an NBA team? What team would thrive with him behind the scenes? #SOHHWhatchaThink?