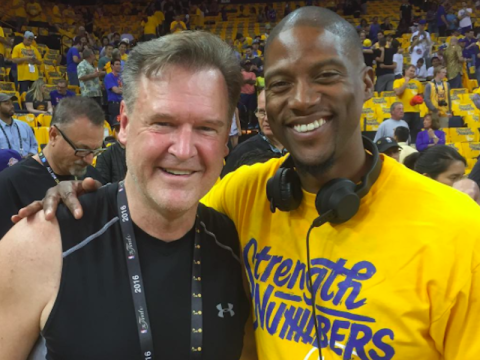 [With the NBA Finals all wrapped up, Golden State Warriors’ DJ D Sharp talks to SOHH about the Lil B “Based God Curse” and if he believes it’s real.]

The Bay loves it. I get it from fans all the time. TheyÔÇÖre like, ÔÇ£You gotta play some Based God tonight.ÔÇØ

They absolutely love it. TheyÔÇÖre feeding into it and itÔÇÖs just part of it. I have to give credit to our guys. They went out there and did what they did.

I think these guys want to bring another championship to the Bay Area and theyÔÇÖre just playing hard. The Lil B thing is kind of like a joke and this thing in the back of our minds and as fans we all feed off of it. We just love it.

But at the end of the day, our boys are handling business and just playing some really good basketball.

The post Golden State Warriors’ DJ D Sharp On Lil B’s “Based God” Curse: “The Bay Loves It” appeared first on For The Best In Hip-Hop News – SOHH.com.