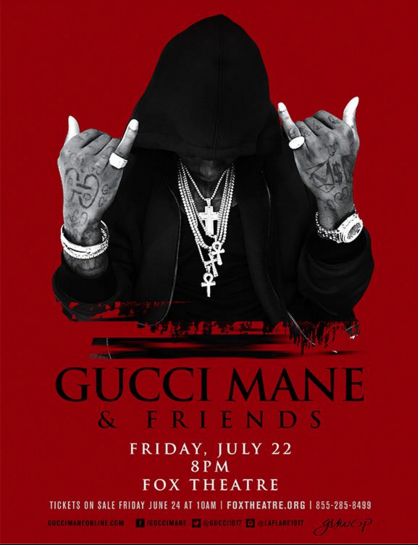 Gucci Mane just made the summer a little hotter. The newly-free rapper just announced a “Gucci Mane & Friends” show in Atlanta for July 22.

The announcement comes right as Gucci Made his first public appearance this past weekend at a “Welcome Home” party also in Atlanta.

The Fox Theater holds just over 4,600 people so expect the show to sell out soon. Ironically, Gucci’s one-time rival Jeezy hosted his Thug Motivation 101 10 year anniversary at the same venue around the same time in 2015. Rick Ross has also had a concert at the ritzy venue.

Friday, July 22 will be a very busy night for Hip-Hop fans in Atlanta. Snoop Dogg and Wiz Khalifa’s “The High Road” tour and the Digable Planets reunion tour both stop in Atlanta on the same night.

The week that he got out Gucci wasted no time telling fans that a Gucci Mane & Friends tour was in the works.

It looks like this concert will be a preview of what to expect. No word on who the “friends” on the show will be. But seeing as how Gucci Mane was either the first to co-sign or sign just about every popular rapper out of Atlanta since 2009, the friends list should be deep.