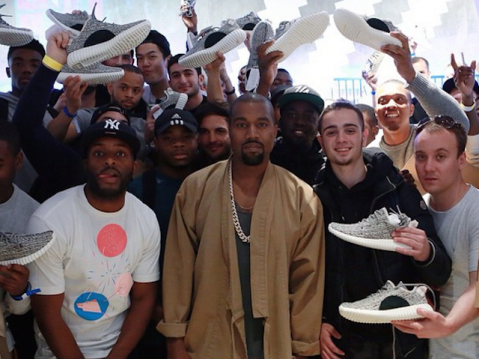 According to 2K executive Ronnie Singh, video game heads can look forward to donning Ye’s kicks in the highly-anticipated title.

“I’m really excited about NBA 2K17,” Singh said in an interview. “Finally, we get to play underwater basketball in an underwater arena. I think this is what people have wanted. You know the other thing weou get to do next year is finally, Yeezys, are coming to NBA 2K17.”

Back in March, pics of Kanye rocking an unreleased pair of his Yeezy sneakers surfaced online.

Kuwthewests took to Twitter to share a photo of West wearing the unreleased sneakers while leaving the Kocktails with Khloe studio earlier today. The pair in question looks to be what is being called the 550 Boost and sports an all-black colorway. (Complex)

“Yeezy is Kanye. They’re synonymous. He’s very hands on in designing it, marketing it, communicating it, it’s been very dynamic to be a witness to the whole process and the participants – we definitely have conversations that are open and honest about our business and our capabilities. The Madison Square Garden show that we just did, I think it was really unorthodox – that idea was something he put on the table with us in November in 2014 when he went to Portland when he saw a sample of the shoe – we had the convo at that time. That would have been epic to do that in February 2015 with the 750 coming out. But with [NBA] All-Star [Weekend] being in New York, being Fashion Week – we put a pin in it and said, ‘Let’s work backwards from that date and do something really epic.’ It played out and worked really great. 20 million people watched it. It was quite a production.” (“The Breakfast Club”)

The post Kanye West’s Yeezys Are Headed To Your Fave Video Game Franchise [Video] appeared first on For The Best In Hip-Hop News – SOHH.com.