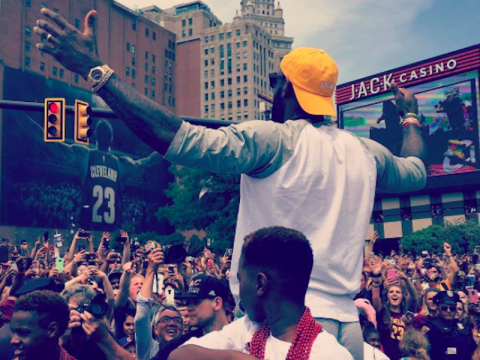 Cleveland Cavaliers’ superstar LeBron James has confirmed his intent to return to the reigning NBA champions and defend their title.

According to reports, King James has no plans of leaving the Cavs when the 2016-2017 stars back up this fall.

When asked by @USATODAYsports if he was returning to Cavs next season, LeBron James smiled, nodded yes.

Also, when asked he planned to play for U.S. at Rio Olympics, LeBron James said, "I don't think so."

"I love it here in Cleveland. I have no intentions of leaving." -LeBron James during parade https://t.co/gpbWPvnwtp

Some reports claim James could make up to $30 million with a new Cavs contract.

James, 31, is expected to opt out of his current two-year deal, which wouldÔÇÖve paid him $24 million next season. He can make around $30 million next season with the influx of TV money and the league’s rising salary cap. (USA Today)

A couple days ago, LeBron penned a must-read open letter to his critics and doubters.

The post LeBron James Already Knows Where He’s Playing Next Season [Video] appeared first on For The Best In Hip-Hop News – SOHH.com.