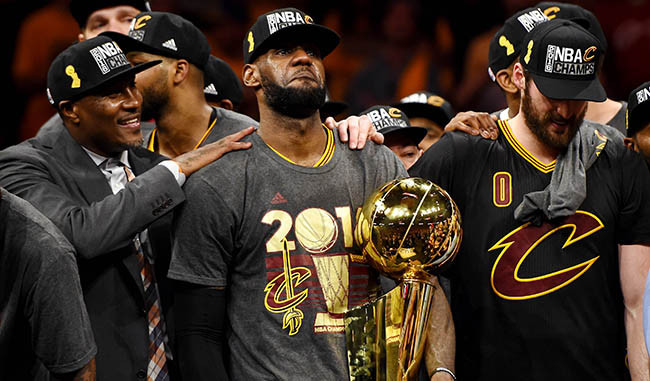 The LeBron James-led Cleveland Cavaliers pulled a miraculous comeback for the ages to win this year’s NBA championship on Sunday. James may have won the Most Valuable Player award to go along with his newest ring, but he had a lot of help, mostly from his teammates on the court and more of an instrumental one off it.

During one of his many postgame interviews, James was asked by ESPN’s Scott Van Pelt how did he handle all the pressure and adversity that comes with being the team’s leader. LeBron responded by citing a song, “A Star Is Born” by Jay Z and featuring J. Cole.

ÔÇ£I just always go back to the Jay Z song ÔÇÿA Star is Born,’ÔÇØ he said. ÔÇ£You guys back in the studio go look it up, listen to it. I just always listen to that and I always stay true to the game. I know what IÔÇÖm capable of, not only on the floor but also off the floor as well, with my leadership and what I bring to the table.ÔÇØ

@HipHopFactsOnly finna tweet Lebron kept listening to "A Star is Born" by Jay-Z to keep him motivated for the Finals pic.twitter.com/0J1LOLqml6

The song comes from Jay’s 2009 album The Blueprint 3. On the track, the Brooklyn MC pays a lyrical salute to everyone who has risen to prominence during Jay’s time in the rap game, but it also points out that while others come and go, he remains. James said he’s in a similar situation in that throughout his 13 years in the league he’s been a topic of conversation and lived in the spotlight.

But, that wasn’t the only time James referenced Jay on Sunday night. He was fielding questions from the media when he was asked how he manages to stay calm under mounting pressure. The Cavs star rattled off another Jay Z reference — well, it was actually a Biggie Smalls’ line originally, but we’d be splitting hairs since LeBron was a kid when Biggie died and Jay started lifting the fallen rapper’s lines as a form of tribute.

Where did @KingJames draw inspiration from during one of the biggest games of his career? @S_C_ lyrics, of course.https://t.co/VuhS9uVF9f

Citing Jay Z’s music isn’t anything┬ánew for LeBron. He made mention of Jigga’s work when responding to similar questions about his inspiration and on and off the court in earlier series, most recently using a “Friend or Foe” line to characterize how he then dealt with physical play from the Toronto Raptors. It all makes a lot of sense considering Jay Z has pearls of wisdom for nearly every situation in life.

Right on cue, Hov made a very rare appearance on Twitter to congratulate King James on his latest accomplishment.

Wow. One of the best finals ever. So proud of King James. Salute Warriors Happy Father's Day to all.

Oddly enough, there’s a video edit from a month ago that coincidentally pairs LBJ highlights with Jay’s “A Star Is Born.” Here’s a chance to check out both — the man and the music — together briefly.