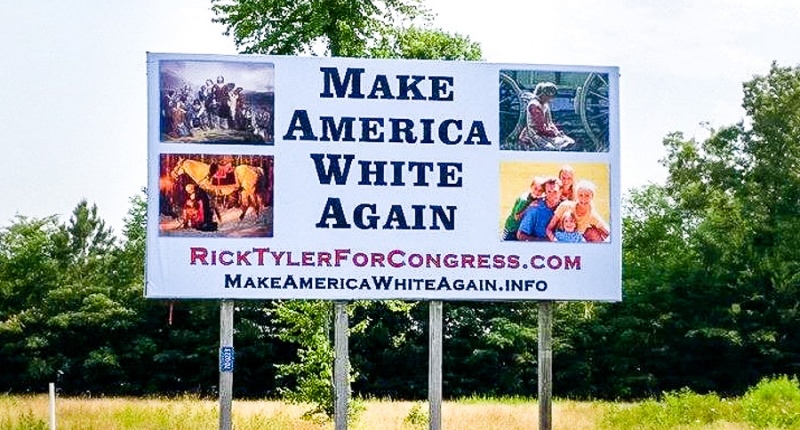 Donald Trump is inspiring the racistsÔÇöbut it’s not like they needed much. A troll named┬áRick Tyler who is running as an indie candidate for┬áTennessee’s 3rd congressional district seat┬áposted a “Make America White Again” sign in Polk County.┬á

Tyler told┬áChannel 3, he has no hatred in his heart for “people of color.” He says the sign’s message is that America should go back to a┬á“1960s, Ozzie and Harriet, Leave it to Beaver time when there were no┬ábreak-ins; no violent crime; no mass immigration.”

Several Channel 3 viewers have called or sent messages to our newsroom, saying the signs do not reflect the feelings of the entire county and that they want them down.┬á

Tyler said, “I respect their right to have an opinion. I believe the majority of the people in the county like it.”┬á

Yes, it’s 2016. Well at least one resident, the good Amy Hines Woody, expressed her outrage at the sign on Facebook, and revealed that the sign has been removed.

Thank you, Amy. Trust, she’s not the only one┬áwith human decency.

Considering the GOP candidate for president is one Donald Trump, do we really need to be surprised?

Check out photos of the superbly racist billboard(s) (another looks like a pic of a plantation…this guy, smh) below.