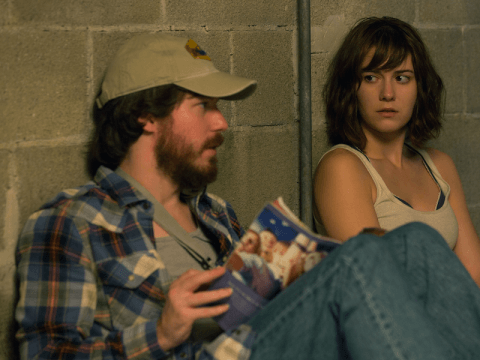 [With “10 Cloverfield Lane” now available on Blu-ray/DVD and Digital HD, actor John Gallagher, Jr. tells SOHH how he landed in the blockbuster sequel to 2008’s Cloverfield.]

In the beginning, the production really happened very organically. I checked my e-mail one day and my agent sent me a script to read and I took a look at it and at the time it was called ÔÇ£Valencia (The Cellar).ÔÇØ

I was like, ÔÇ£Oh, this sounds interesting. WhatÔÇÖs this?ÔÇØ I started seeing Dan Trachtenberg was involved and of course I saw J.J. AbramsÔÇÖ name right away and thatÔÇÖs always exciting.

But I was like, ÔÇ£Oh, I should start reading this.ÔÇØ I totally fell in love with the script. I just thought the characters were very real and it was really intense. It was scaring me. I didnÔÇÖt even know what was going to happen on the next page and then I found out Mary Elizabeth Winstead and John Goodman were involved and I thought, ÔÇ£TheyÔÇÖre perfect for these parts.ÔÇØ

Then I started talking to Dan, the director, and we were on the same page about the story and the script. I made an audition tape, sent it in, and I ended up getting the part and then got to join the party after that.

ItÔÇÖs funny because we didnÔÇÖt know, at the time, and so there was no pressure to make a ÔÇ£CloverfieldÔÇØ sequel. Nobody knew thatÔÇÖs what it was going to turn into.

It was only as we were making it that J.J. was watching a lot of the dailies and checking out the movie and he started thinking, ÔÇ£Hold on, this thing could actually work as sort of a serialized anthology, the second part.ÔÇØ Almost like if he was trying to do ÔÇ£Twilight ZoneÔÇØ under the ÔÇ£CloverfieldÔÇØ name.

So there wasnÔÇÖt any pressure to try to do that when we were filming it. We just wanted to make a good thriller. ThatÔÇÖs really all we set out to do.