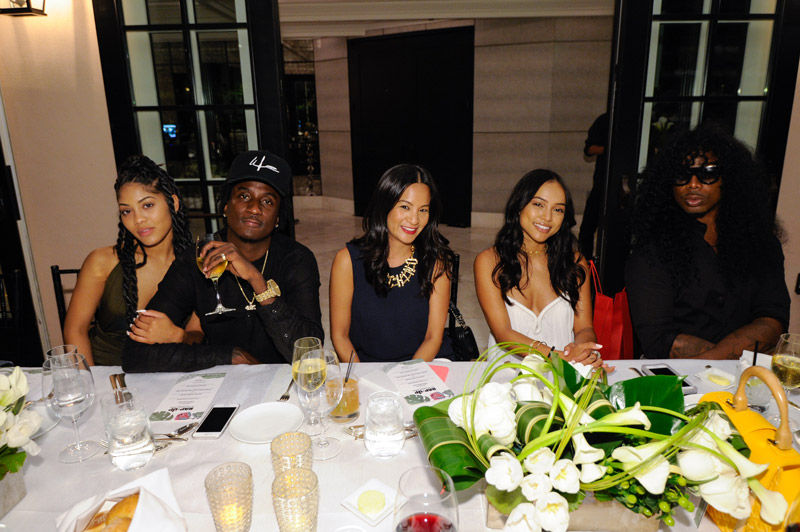 Rap-Up’s Pre-BET Awards Dinner was the place to be on Tuesday (Jun. 21). Presented by Hennessy, the intimate event was held at the luxurious Hotel Bel-Air and featured a star-studded guest list.

Karrueche Tran, K Camp, and Mila J were among those who joined Rap-Up’s founders and brothers, Devin and Cameron Lazerine, for a special evening that celebrated music and entertainment ahead of this weekend’s BET Awards.

The stars showed out on the red carpet. Mila was tomboy chic in baggy jeans and a midriff-baring adidas top. Meanwhile, Karrueche kept cool in a white summer dress and Yeezy Season 2 beige knit boots.

“This is amazing,” said Karrueche. “It’s a nice vibe, a nice setting. It’s a beautiful warm day, we’re in like a garden, and it’s a really cool atmosphere.”

K Camp, who donned all black, agreed. “The vibe right now is very rich,” he said. “We at the Hotel Bel-Air. It don’t get more rich than that! We got free Hennessy, everybody enjoying themselves. Good music, beautiful ladies, it’s a great vibe.”

After drinks, guests were seated at a gorgeously-adorned table with all-white floral arrangements. The three-course meal, prepared by famed chef Wolfgang Puck, was also filled with delights, including the little gems Caesar salad, with its herbed croutons, creamy garlic vinaigrette, and tuscan olive oil. Guests chose between the saut├®ed Alaskan halibut and the mesquite grilled New York sirloin steak, which also featured a Hennessy-mustard sauce. Finally, the night capped off with a chocolate ganache tart with fresh raspberries and whipped cream.

This is becoming quite the tradition. Last year, Rap-Up celebrated its 15th anniversary with a Hennessy-hosted dinner, which was attended by Dawn Richard, Melanie Fiona, Sevyn Streeter, Casey Veggies, Melody Thornton, and Karrueche.