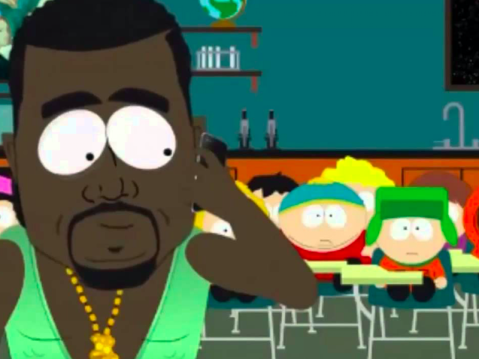 Footage of creators Matt Stone and Trey Parker joked about their ÔÇ£South Park: The Fractured But Whole” game and made references to Yeezy’s title.

ÔÇ£ThereÔÇÖs a gay fish in South Park, and he loves fish sticks, and the gay fish actually wants you to help him get his mother into heaven, so you get to journey up and try to help this little gay fish get his mom into heaven. You’re acting like this sh*t is regular. This sh*t is hard. I hope you all saw the Kanye thing.”

Dating back to 2009 “South Park” has taken aim at Yeezy in multiple episodes.

Following the ÔÇ£FishsticksÔÇØ episode, Kanye wrote a post on his website thanking ÔÇ£South ParkÔÇØ for the episode. In 2010, Matt Stone talked to Pitchfork about the episode, saying, ÔÇ£I mean weÔÇÖre like, ÔÇÿKanye, you are humorless. You do need to grow a sense of humor.ÔÇÖ Yeah, so that was not what we expected to have happen, to have him thank us. [laughs] I thought we were going to need a bodyguard, you know?ÔÇØ In 2013, the West parody returned to ÔÇ£South ParkÔÇØ once more in an episode that featured a ÔÇ£Bound 2ÔÇØ goof. (Pitchfork)

Since last year, Yeezy reportedly has worked on the release.

According to Encyclopedia PicturaÔÇÖs website, the game has been in production since 2015 under the direction of Isaiah Saxon and Sean Hellfritsch. ThereÔÇÖs still no word on when the game will be released or what platform it will be playable on. The LA-based studio have worked together with a number of artists in the past on music videos including Panda Bear, Metronomy, Bj├Ârk and Grizzly Bear. (NME)

Back in February, buzz about Kanye’s new game started to develop.

Kanye West ended his album release party / fashion show in New York with a surprise announcement: that he’s working on a video game called Only One about his mother “traveling through the gates of heaven.” The game shares its name with a song West released two years ago, speaking from the point of view of his late mother after the birth of his daughter. West showed a short reel of dreamy footage from the game that, true to his word, depicts his mother flying through clouds and traveling on the back of what appears to be a Pegasus. (The Verge)

Kanye previewed a video game he has been working on "Only One: The Game" pic.twitter.com/AbfUVZkN4J

The post South Park Creators Keep Sticking It To Kanye West [Video] appeared first on For The Best In Hip-Hop News – SOHH.com.