The Bulls Have Traded Derrick Rose To The Knicks 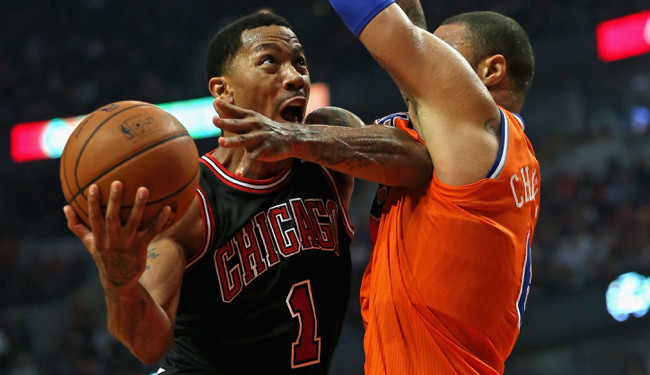 The Bulls are sending Derrick Rose, Justin Holiday and a 2017 second-round pick to the Knicks for Robin Lopez, Jerian Grant and Jose Calderon, as K.C. Johnson of the Chicago Tribune first reported.

The Bulls are sending Derrick Rose, Justin Holiday and a 2017 2nd-round pick for Robin Lopez, Jerian Grant and Jose Calderon, per source.

Adrian Wojnarowski and Shams Charania of The Vertical first reported the two teams were in “serious discussions.”

Knicks and Bulls are in advanced talks on a deal to send Derrick Rose to New York, sources tell @ShamsCharania and me.

And Woj has confirmed the deal is happening and the players involved have been notified, too.

The Bulls are trading Rose to the Knicks for Robin Lopez, Jerian Grant and bigger package, sources tell @TheVertical

Players involved in the Rose deal have been informed, sources tell @TheVertical.

This isn’t that surprising, despite how much cache Derrick Rose still has with many fans. There had been rumblings less than a week ago that Phil Jackson and Co. were interested in the 2011 MVP, but what the Knicks gave up leaves a lot to be desired.

We’ll get to the angry Knicks fans in a second, but Rose is on the last year of his gargantuan deal that will pay him over $21 million next season. So, even if this experiment totally falls apart ÔÇô and we think it will ÔÇô New York can still just cut their losses next summer when he enters free agency.

As for dealing Robin Lopez, New York’s surprisingly smart free agent signing last summer, that’s not so great, which is probably why Chicago agreed to the deal. Pau Gasol is likely gone in free agency this summer (he’s got a player option that’s not going to pick up). And Joakim Noah, who is a free agent for the first time in his career, could possibly follow his old running mate in Chi-town.

Then there’s free agent Dwight Howard and the aforementioned Pau Gasol, who could both sign with New York after this news.

Noah will follow. From NY, loves Derrick and Melo. https://t.co/AtrljP3PMb

Clearly Knicks will be in play for Gasol, Howard, all and any big men with a pulse in free agency.

Something to keep in mind because some have already said that Rose has a 15 percent trade kicker, which we didn’t include in the number above on the last year of his deal, but it would exceed the maximum allowable and then it would be void, per the estimable CBA expert, Bobby Marks.

Rose trade kicker is voided since the 15% would exceed his max contract. Kicker would have been in play if Rose was traded in July.

Something in favor of the move for the Knicks is the fact that Carmelo Anthony has thrived with an above-average point guard. The only time he’s ever made the Conference Finals came when Chauncey Billups was running the one spot for the Nuggets.

But with the ascending Kristaps Porzingis, Rose and Melo, there might not be enough shots to go around ÔÇô and that’s discounting a possible second signing this summer of an offensive-minded center like Phil’s former center in LA, Pau Gasol (don’t do it Phil).

Big question in New York: How do you divvy up the shots? And, more importantly, how do you make sure rising star @KPorzee gets his?

Chicago still might’ve won this deal because RoLo is a solid center on a decent deal, especially considering where contracts are headed. And Jose Calderon’s corpse is offset somewhat by Jerian Grant who showed flashes of a substantive career in his rookie campaign

Given depth of PG position, Rose's health/play, expiring deal, etc, not much of a market for him. Bulls did well to get Rolo and Grant.

And while Rose has never come close to his level in his MVP campaign or in the following season before he went down in the playoffs, he did play 66 games this past season, averaging 16.4 points, 4.7 assists in 31.8 minutes per game while shooting 42.7 percent from the floor and just 29.3 percent from deep. It was the most games he’s appeared in since his string of knee and leg injuries starting in Game 1 of the first round in 2012.

And while Derrick reportedly hadn’t ever considered playing elsewhere when asked about it by Jeff Zillgitt of USA Today earlier this year, once he learned of the news he allegedly warmed to the idea, as ESPN’s Chris Broussard reports.

Source close to Rose tells me he's excited about playing for Knicks. "His 1st choice was New York (if traded). He wants the spotlight.''

For Bulls fans, the Derrick Rose era has come to an end. Here’s a handy timeline if it’s not already ingrained in your basketball memory.

The Rose era in Chicago comes to an end. pic.twitter.com/1HgDnNt1cN