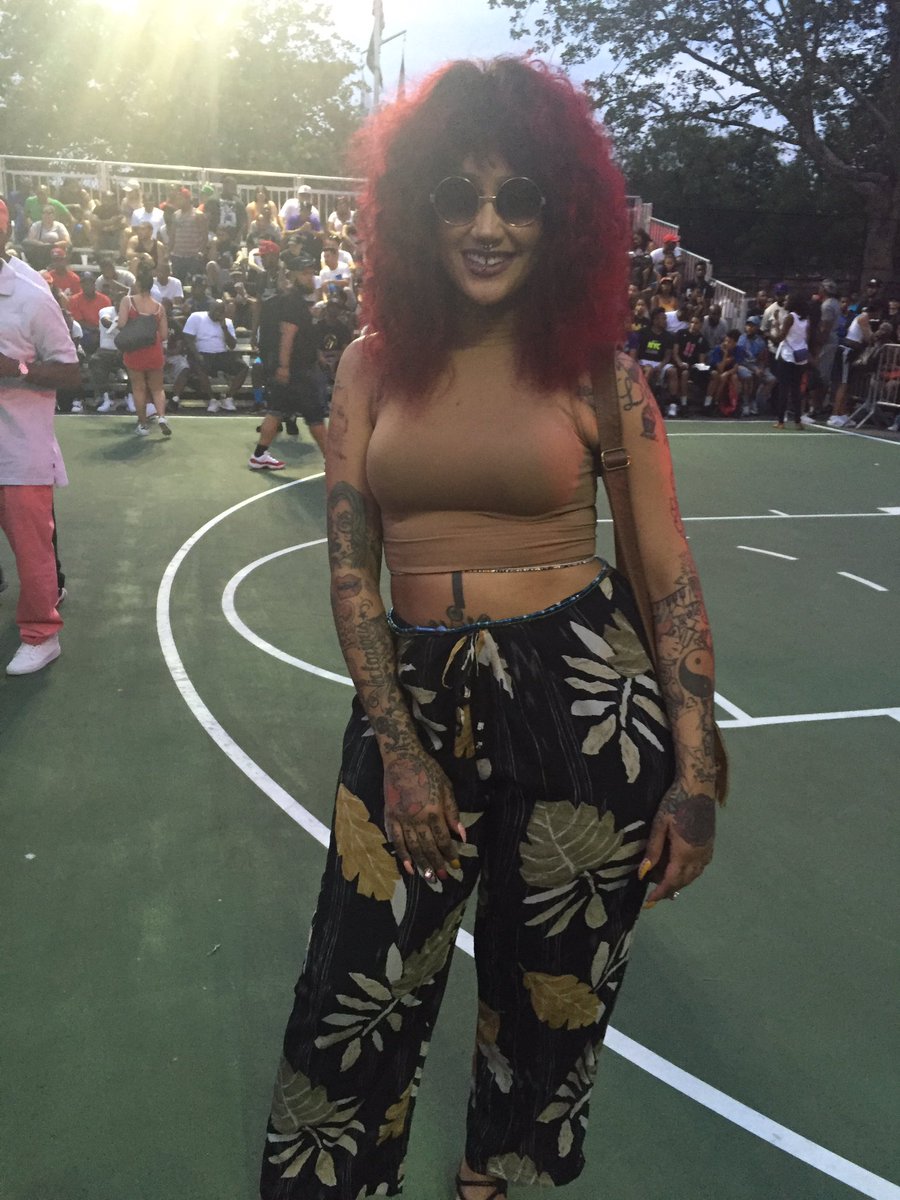 The Bronx newcomer decided to collaborate with the Final Four team to introduce his squad to a packed crowd at the Monsignor Kett Playground in uptown New York City. A couple of familiar faces currently making a name for themselves on the NCAA basketball stage decided to grace streetball fans with their presence also last night, and did not disappoint. Vh1 Black Ink Crew star Donna (below) was in attendance also to check out the action-packed game.

In the first match-up, newcomers The Label and Team Jimmy Jazz had a battle full of trash talk, isolation possessions and NBA range threes being drained. Their match-up was a good Week 2 reminder for fans to realize how deep this year’s field is at Dyckman. Once the dust was cleared, it was the The Label taking down Team Jimmy Jazz with a score of 78-75. Leading the way was Auburn Tiger shooting phenom Kareem “NuNu” Canty with 20 points. He was able to get the crowd involved by showing off why he was one of top leading scorers in the nation with his elusive ball handling skills and Steph Curry-like range by knocking down four deep threes. Big East champion Seton Hall Pirates guard Kadeem Carrington chipped it in for the win with 15 points. His teammate Desi Rodriguez gave fans a preview of what the Big East should prepare for next season, as the crafty lefty finished at the rim with ease by completing toughly contested layups and destroying the rim for alley-oop jams. Meanwhile, UMASS transfer guard Jabarie Hinds and Kieth Thomas led Team Jimmy Jazz in scoring with 15 points each.

In the second game, Rodney Park improves to 2-0 by defeating Team 914 with the score of 87-78. Leading the way for them was big man Miles Millien as he scored 25 points. His presence on the block created opportunities for former St. Johns floor general Malik Boothe to contribute to win by finishing hard at the rack and knocking down mid range jumpers. Boothe finished with 20 points.

In a losing but hard fought effort, Aaron “The Problem” Williams showed host Mr. Cha Ching he’s not trying to make this year his last rodeo. The season vet proved fans that he still has it from years of winning championships year in and year out. The former Del State Hornet led all scorers with 24 points.

Former Auburn Tiger scoring machine Antoine Mason displayed tenacity and strength as he was able to finished strong at the rim while drawing fouls. The son of late, great Knick forward Anthony Mason, Antoine was able to make a great impression in front of the Dyckman crowd by putting up 24 points.