The Primer: 10 DJ Khaled Songs Everyone Should Know 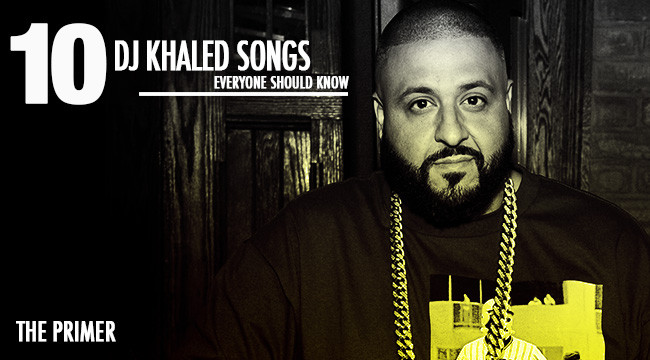 In 2016, DJ Khaled has officially taken over social media and is now earning big time endorsement deals based strictly off of his boisterous personality. But┬áhe’s much more than a handful of catchphrases and the ultimate sneakerhead.

The long-time Miami DJ is actually one of the most respected behind the scenes guys in hip-hop, known for his ability to help crossover stars maximize their potential way ahead of schedule and orchestrate collaborations even Jimmy Iovine couldn’t finagle.

To help remind nearsighted rap fans DJ Khaled isn’t just some guy who yells on other people’s tracks and has a hilarious Snapchat profile, we’ve compiled the ten most essential tracks from Mr. We The Best. Considering the collective amount of YouTube plays is so astronomical, this guy has every right to be confident.

Before DJ Khaled, Pitbull, and Rick Ross were international superstars, they were residents of Miami, Florida. On this lead track from Khaled’s 2006 debut Listennn… the Album, the Roc Nation DJ and his homies linked with Trick Daddy to rep harder for their hometown than anyone else in the game. Using organ-based production from The Runners that would embody much of Khaled’s early work, the song not only set the tone for the album, it let everyone know Dade County’s music scene was about to be a force to be reckoned with.

While DJ Khaled’s vocal presence isn’t found on this stand-out single from Listennn… the Album, there’s no question he’s responsible for one of the earliest posse cuts from Kanye’s G.O.O.D. Music crew. Not only that, but it’s a classy joint that solidified Yeezy’s industry clout and still stands the test of time musically. Believing in the right people pays off.

As the masses were just starting to get to know DJ Khaled in 2008 and We The Best season was beginning to set in, this star-studded collaboration capitalized on the budding international success of Akon, prime Weezy and a resurgent Fat Joe to let everyone know Khaled was aiming for world domination.

After fulfilling his prophecy and earning massive star power with his previous two projects, DJ Khaled wasted no time dropping his We Global album. The lead single was this unquestionable heater, which featured more hood favorites than A-listers and helped catapult the careers of rappers like Ross, Boosie and Plies during key years in their growth.

Oh, you didn’t realize DJ Khaled had The Throne on a song together? Yes, although the original version of “Go Hard” was a fairly huge hit, this tweaked remix with Jigga wasn’t as highly applauded as it should’ve been. Kind of mind blowing, right? Jay said “I’m OnStar for new born stars.” C’mon man.

Do you realize how hard getting nine rappers together for the same song is? Let alone big names like the ones featured on this scorching remix to Khaled’s 2011 hit off We The Best Forever? That’s like parallel parking a monster truck in Times Square or catching a bullet in mid-air. It’s next to impossible. Furthermore, this is after getting Lil Wayne, Rick Ross and Plies on the original, which just isn’t as nasty as this upgraded remix. That’s why DJ Khaled is the best. His logistics game is next level and he never settles.

“All I Do Is Win” Feat. Ludacris, T-Pain, Rick Ross and Snoop Dogg

Whether you love or hate this monster single from DJ Khaled’s appropriately named album Victory, there’s no question it’s genius. This is our generation’s “We Are The Champions” or “Shout” — a radio-ready anthem that’s custom-built for arenas during playoff season and which can earn an eternity of staying power based on its hook alone. What artist doesn’t want a song like that? Khaled will continue winning off this one for decades to come.

“I’m on One” Feat. Drake, Lil Wayne and Rick Ross

When this We The Best Forever single came out, Lil Wayne was on his way out of his talent apex, Rick Ross was amidst his peak status and Drake was on the verge of entering another level altogether. Khaled saw that, blended them together for this Noah “40” Shebib-produced radio killer and helped everyone out along the way — especially himself.

Despite years of hearing people wishing for a song where Cole World and Kendrick would trade bars, believe it or not, one already exists. With Big f***ing K.R.I.T., nonetheless! “They Ready” has been tough as nails since being released in 2012 and if this sample-based super collabo dropped in 2016, people would lose their minds.

When DJ Khaled saw his core hip-hop audience was focusing more on R&B than ever before, he made the logical move and combined all the most popular rap-based singers and put them on the same song. Vintage Khaled. As a result, the second single off his 2014 album I Changed A Lot has 178,655,271 views and counting, while guys continue soaking up as much game as possible.

Check out previous entries in The Primer series where highlight essential songs from artists from rap’s past and present.