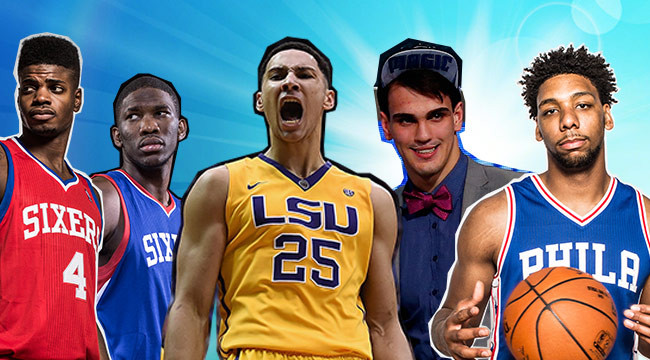 It has been a rough few years for my beloved Philadelphia 76ers. The team’s strategy of bottoming out to build back up — #TheProcess — resulted in near historic losing and every spouting lunatic with a column or television show yelling about it like it affected them personally, which all got very frustrating after a while. We could use some good news. Oodles of it. Or any of it, really.

Luckily, this has been an exciting few weeks. The team landed the No. 1┬ápick in this year’s draft and appears poised to select LSUÔÇÖs Ben Simmons; there’s a 99 percent chance 2014 first-round pick and possible Game of Thrones character Dario Saric is coming over from Croatia this offseason, according to a European newspaper that I had never heard of but have now nominated for every major international journalism award; and Joel Embiid has been cleared for light scrimmaging after two full years of surgeries and rehabilitation, which almost definitely marks the first time in my life that the phrase ÔÇ£light scrimmagingÔÇØ has caused me to burst into a fit of uncontrollable crying. It’s been a strange few years.

The only major downside of that run of developments is that, as you may have noticed, it adds two power forwards and a center to a roster that already has a bit of a logjam in the front court, in the form of 2013 first-round pick Nerlens Noel and 2015 first-round pick Jahlil Okafor. The teamÔÇÖs grand experiment to play the two of them together went over about as well as a drunken 3 a.m. phone call to your ex (ÔÇ£No, Sharon, Sharon, listen. Sam Hinkie was BUILDING something, and he got run out of town by an ownership group that got scared and a media he never cozied up to. Now the weasel Colangelollo-… I mean, the weasel Colangelos get to reap the benefits. It’s not FAIRÔÇØ), which has caused the rumor mill to start churning out anonymously sourced stories about one or both of them getting traded for additional lottery picks in this draft, which has caused my work productivity and general quality of life to plummet because I must read all of them. Every one. It’s not healthy. It can’t be.

But there’s another option here, a potentially revolutionary one that I think is worth discussing if youÔÇÖre willing to hear me out. Ready? Here goes:

The Sixers should start a lineup of giants that block out the dang sun.

Some scouts and experts think Simmons ends up as a point guard anyway, at least on offense, thanks to his ball-handling and passing, so we’re not starting out in unreasonable territory. A 6-foot-10 point guard is great because he’ll be able to see over the top of the defense to identify passing lanes and because it will be funny to see him standing to smaller counterparts like Boston’s Isaiah Thomas. This is what we call a win-win.

Putting Joel Embiid at shooting guard makes sense becauHEY WAIT, WHERE ARE YOU GOING? You promised to hear me out! Come back.

Have you seen the videos of Joel Embiid shooting threes? I mean, have you? Because they are more or less the only thing that kept me alive last season. Here, look.

Brett Brown is on the record saying Embiid might be the team’s second shooter and nothing that happens in any of those videos contradicts that. He starts at shooting guard.

Almost everything I know about Dario Saric I learned from grainy YouTube videos of Croatian basketball games that were apparently shot by a camera that was mounted on a rafter and zoomed all the way out so it looks like the players are ants playing with half of an orange Halloween ice cream sprinkle, but I think I can say with the utmost certainty that he will be one of the five greatest players named Dario in NBA history.

Jahlil OkaforÔÇÖs biggest on-court issues in his rookie season were interior defense and rebounding, which are generally things you’d like to have from a starting big man, but which are somewhat less necessary in a lineup where every player is tall enough that they have to duck under a standard door frame so as not to bonk their head while walking through. There’s a combined wingspan of something like 40 feet on the floor in my All Huge Guy lineup. Rebounding and interior defense will happen almost by accident. Everything else might go to hell, sure, but those two things, we got. Just focus on putting the ball in the bucket, Jah.

Nerlens Noel can’t shoot a basketball to save his life but I’ve seen him switch off onto a point guard on one possession and block two or three consecutive shots at the rim on the next, so he’s all right with me. Putting him and Okafor back together in the front court isn’t ideal, as I stated earlier, but we’re doing it anyway for two reasons: One, until someone invents a machine that allows us to put the two of them in there and get out one 6-foot-10 human who can guard five positions and make, like, one hook shot, it’s kind of all we got. And two, I literally just put a 7-foot-2 giant with chronic foot problems at shooting guard, so maybe this isn’t the biggest of our concerns.

Does this lineup have flaws? Well, yeah. As the league moves toward a more positionless, free-flowing style where Draymond Green logs serious minutes at “center,” a huge starting five like this could get dusted pretty regularly in transition, even if it is surprisingly agile for its size. And the only way I see perimeter defense working is to set up in a 2-3 zone and have everyone stretch their arms out really, really far and hope it covers the entirety of the court sideline to sideline like a game of multimillionaire Red Rover.

But in my defense, it would be hilarious, and it would cause all those spouting lunatics I mentioned at the beginning to lose what’s left of their minds in new, funnier ways, so I vote we try it.