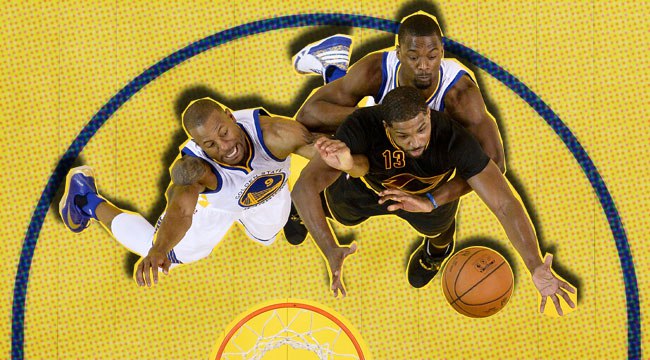 OAKLAND ÔÇô Skepticism gleaned from the Cleveland Cavaliers’ decision to bite the bullet and pay Tristan Thompson last fall was about much more than his price tag. Sacrificing long-term financial flexibility to lock up a guy who played the same position as Kevin Love was a hard sell by itself, and LeBron James warranting ample time as a small-ball power forward only added to the naysaying. Timofey Mozgov had established himself as one of the game’s premier rim protectors just a few months earlier, too.

Just how would Thompson carve out a niche to justify his five-year, $82 million contract given the inherent limitations of his game and the redundancy of his teammates?┬áThe answer, of course, was always a reflection of his unique worth against the Golden State Warriors.

That seems obvious now. Thompson was more instrumental to Cleveland’s crowning championship comeback in this NBA Finals rematch than seemed imaginable before the season began and even as it wore on. His ability to hang with Steph Curry and Klay Thompson on switches was the linchpin of the Cavaliers’ revamped defense, and his tireless work on the offensive glass was a specter that loomed over the Warriors every time they prepared to grab a defensive rebound.

It’s James’ realization of a life-long goal and Irving’s arrival as a hard-earned┬ásuperstar, but this series definitely belonged to Thompson, too. And fittingly, the Cavaliers┬áended their city’s notorious 52-year title drought with a Game 7 victory that instantly validated the controversial choice to keep this supposedly mismatched core together.

The first game Cleveland took from Golden State in the Finals is one Love missed with a concussion. Richard Jefferson started in the former All-Star’s place, affording Tyronn Lue’s club overall activity and defensive versatility it normally lacks while confirming the long-held suspicion that Love just couldn’t keep up with the go-go Warriors. That belief prevailed even after he was reinserted as a starter and the resurgent Cavaliers forced Game 7, too.

But it might have changed for good on Sunday, an indication of Love’s overblown defensive ineptitude as well as the viability of his doomed-to-fail alliance┬áwith Thompson up front. Cleveland’s starting bigs were on┬áthe floor 18 minutes in Game 7, registering a +10 plus-minus, grabbing nearly┬á65 percent of all available rebounds, and holding Golden State to a 79.5 offensive rating ÔÇô the stingiest number of any tandem donning black sleeves.

The success of lineups featuring Love and Thompson shouldn’t be shocking. They played 29 minutes together in the Cavaliers’ Game 5 win, and had a net rating of +3.8 over the 88 minutes they shared in this series prior to Sunday night. A frontcourt of Love and Thompson isn’t ideal when facing a team like Golden State, but it’s certainly workable at least ÔÇô even when James and Irving aren’t at their┬áscoring and playmaking best.

Cleveland raised the Larry O’Brien Trophy for the first time in franchise history after winning Game 7. That’s what matters most, obviously, but secondary to the ultimate achievement is the realization that both Love and Thompson can thrive while coexisting against an elite opponent that champions principles of modern-day offense.

Thompson was never the problem. He doesn’t have the length or feel to be a great shot blocker, but possesses every other attribute teams seek in defensive-oriented big men, most notably the wheels to make life difficult for perimeter players in both isolations and pick-and-roll play.

The Cavaliers, for instance, wouldn’t so readily switch this early ball screen from Harrison Barnes if they didn’t have full confidence in Thompson’s chances to contain the most dangerous playmaker in basketball.

The Splash Brothers will be haunted all offseason by their surprisingly frequent inability to take advantage of Thompson guarding them throughout the Finals. Love, meanwhile, was targeted and exploited more often by the Warriors’ incessant passing, screening, and cutting than any of his teammates ÔÇô Irving included. Still, he was more game defensively than anyone anticipated when Cleveland needed him most.

Take Love’s defense on this staggered ball screen for Curry midway through the third quarter, for example. He doesn’t directly cause the two-time MVP’s puzzlingly careless pass, but bumps him off course with an aggressive, well-timed hedge that helps lead to a turnover and Irving’s subsequent three-point play in transition.

The merits of playing Love and Thompson simultaneously are perhaps best indicated by their coach’s vote of confidence with the season on the line.

As the fourth quarter clock read 3:40 and the score was tied at 89-89, Steve Kerr sent Barnes to the scorer’s table for Festus Ezeli. Despite knowing Golden State was about┬áto┬áemploy its vaunted death lineup during the crunchiest of crunch times, Lue brought in Love for Jefferson, essentially cinching the possibility of one of his big men getting left on an island versus the two best shooters in the world.

How did they respond? Love’s sublime individual defense on a bumbling Curry tells the story better than any words or statistics can.

Speaking of confidence: See how James points for a switch on the off-ball screen Iguodala sets for Green? He knows that will result in Love getting stuck on Curry, but calls for it anyway. Was it the right decision? Probably not. As the saying goes, though, ball don’t lie.

Neither do championships, naturally. Nobody can take away what Cleveland accomplished in becoming the first team to ever win a title after falling behind 3-1 in the Finals. It’s a monumental achievement, and one that will be remembered forever.

Yet as the Warriors know all too well, one triumph┬ádoesn’t come close to guaranteeing another. The Cavaliers might not even be favored to win it all again next season, not with teams like Golden State, the Oklahoma City Thunder, and San Antonio Spurs seething over missing out on a championship in 2015-16.

Cleveland will need to be better to raise a trophy again this time next year. Love and Irving must clean up their pick-and-roll communication and overall defensive engagement. It’s pertinent that Thompson continues developing as a playmaker in space. Iman Shumpert just has to get in the gym, and another year of wear and tear demands that James re-tightens his ever streaky jumper.

But the champion Cavaliers will certainly have the chance to repeat regardless. And if Game 7 is any indication of things to come, the strengthening partnership between Love and Thompson will make┬áthose odds even better as next season progresses.