An Abbreviated History of Beatles Samples in Hip Hop 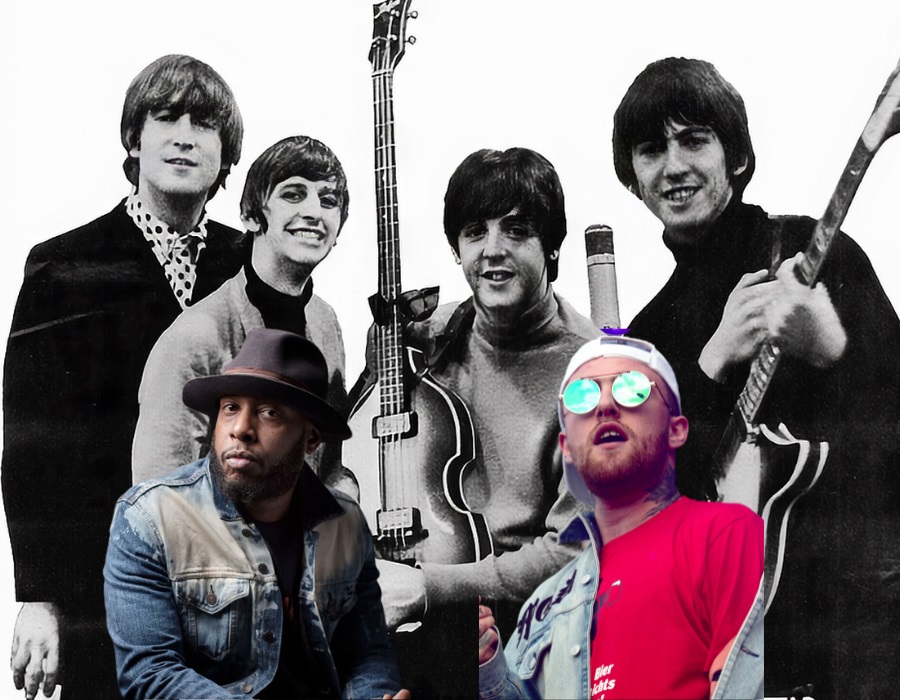 Music purists, specifically fans of transcendent bands remain the old guard when it comes to sampling their beloved bands/musicians.  You hear verbs thrown around like “stealing, sullying, tainting and tarnishing” when recognizable samples are used. According to the old heads from this perspective, sampling is a sign of disrespect to the original artist, and in cases where the sample is not cleared, they may be right. When an original artist or composer does not sign off on the use of a sample, and it is still used, a violation of intellectual property is clear.  This has resulted in many infamous lawsuits: (Jay-Z was sued by Soul Singer Ernie Hines for Big Pimpin’, Kendrick Lamar faced a plagiarism case for his use of Eric Reed’s sax riff in his Section.80 banger Rigamortis, and Nicki Manaj battled in court with Tracy Chapman over her use of Chapman’s Baby Can I Hold You. The use of samples is still a heavily debated topic, especially in connection to history’s most famous band, The Beatles.

Drake’s Certified Lover Boy, which dropped this week, begins with the track Champagne Poetry, which samples The Beatles in quite a roundabout way; taken directly from Masego’s Navajo which in turn samples The Singer’s Unlimited cover of The Beatle’s Michelle.  Champagne Poetry begins by flipping the infamous refrains, “I love you; I love you; I love you” and “The only word I know that you understand”.  Drake chose to credit John Lennon and Paul McCartney as co-writers, regardless of the actual sample being extrapolated from the afore mentioned sources. Beatles fundamentalists obviously cringe at the idea of such a classic song being used in such a way, but it is not a clear-cut perspective: artful sampling is a form of recycling that connects new generations and demographics with music they may have never encountered otherwise.  Samples are a strand of cultural relevance, are wrought with nostalgia, and further weave hip hop within the fabric of pop culture.

Drake (by way of 40 and Masego who produced Champagne Poetry) are hardly the first hip hop acts to sample “the Fab Four’s” music.  While samples have in many cases not been cleared, here are some famous uses of The Beatles as sampled in hip hop.

Both Brooklyn’s underground legend Kweli and Atlanta’s B.O.B tried their hand by sampling one of The Beatle’s most beloved and evocative tracks, Eleanor Rigby. Relying on the original track’s effervescent strings and haunting chorus, Kweli especially shines, spitting with trademark sincerity, and painting a desolate, apathetic picture of modern society’s seclusion.  B.O.B creates more of a southern anthem, with the sample, adding wavy synths and a layered vocal hook.

As part of 2012 mixtape Macadelic, producers Big Jerm and Sayez sampled the hook and riff of one of The Beatle’s most hallucinogenic tracks, Lucy in the Sky With Diamonds.  The trippy strings Mac borrowed make for an eerie backdrop on a track that became a party anthem.  The kaleidoscopic themes of both tracks were further brought to life through a similarly trippy music video.

Wu-Tang was the first rap act to legally sample The Beatles, clearing an interpolation of My Guitar Gently Weeps, which was appropriately played by George Harrison’s son.  The Heart Gently Weeps is trademark Wu-Tang, with quite a bit of melody borrowed from The Beatles.  Vivid lyricism, an Erykah Badu hook, and fire verses from Raekwon, Ghostface Killah and Method Man make this perhaps the most memorable and complete use of borrowed Beatle’s material in hip hop history.