Dreamville’s Cozz Back with a Vengeance on New EP “Fortunate” 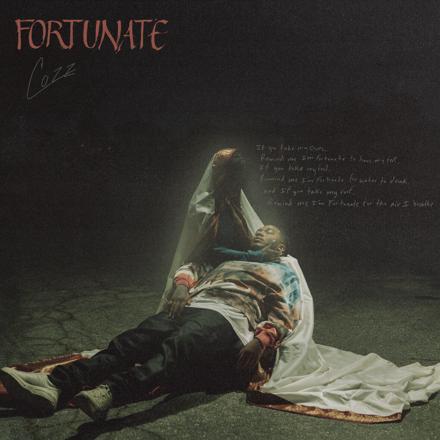 Dreamville Lieutenant Cozz bounced back with compelling third project; a profound seven track EP titled Fortunate.  Since the Revenge of the Dreamers III dust settled, Cozz has been markedly quiet, releasing just a smattering of singles and features.

Safe to say, the silence was well worth the wait.  Fortunate is not only home to heater after heater; it is a complete project with true depth and substance.  The 28-year-old L.A. emcee displays his adaptability, powerful pen game, and an ability to inject his music with the influences of the top-tier artists around him at Dreamville.  Fortunate truly bumps, front to be back, and should be listened to loudly: car, speakers, or headphones.

Fortunate was released with a bit of controversy, as Cozz took to twitter to express his frustration regarding the order of the project’s tracks on streaming services:

No lie I’m frustrated cuz I had an idea of how I want people to hear this ep but technical difficulties ddnt allow that to happen. What’s below is the ✅ order so if u care enough, listen as is but if not fuck it the music is the same. This will be fixed by Friday enjoy. #1mohour pic.twitter.com/mu7QVLF50B

While Cozz states that the music is the same, his frustration is evident, and brings up an important topic.  Last month Adele publicly complained about the shuffle option on streaming services, suggesting that it impacts the artistic selection of song order.  Spotify responded by removing shuffle as the default option for listening.

To your average music fan, this point may seem a bit trivial, but music, like all forms of art, is meant to be digested in the manner it is presented by the artist.  It is highly suggested that Fortunate is played in the order Cozz envisioned, beginning with Cry and ending with Fortunate.

Fortunate begins with perhaps its most traditional, boom bap style joint, Cry, which is reminiscent of peak Nas.  Vivid storytelling, a bass-forward beat (Produced by Elite), and Cozz’s rapid, yet esculent flow makes Cry an instant classic.  More than anything, the lyricism shines here: (“Can’t walk to the store to buy vitamins/without my iron and a fresh shirt that’s ironed/’Cause if I’m dyin’, then I’m flyin’ into heaven.”)   Cozz paired the auditory experience of Cry with a lush music video.

While YG fans might argue that Control Problems is the club banger of the EP, the two minute eighteen second Higher Power might steal the show.  Cozz flexes his hook ability, displaying some of the same vocal talent that has propelled his label founder to international stardom.  While Cozz and TDE’s REASON jokingly suggested they were going to rob J.Cole on Revenge of the Dreamers III bop LamboTruck, Cozz definitely at least borrowed some of Cole’s skill-set on this one.  The verses go in, and the Carvello production is top notch.

Cozz released Addicted mid-November, relying on the tracks relatability, claiming in the Instagram post for the track, “Whether it’s good, bad or ugly. We’re all addicted to something.”  Addicted is a thoughtful commentary on how despite severity, everyone understands the concept of being hooked.  With a drop this hot, there are sure to be plenty of hip-hop heads addicted to this record right now.

So am I and Fortunate are emotive, thoughtful songs, but it is the quirky sixth track Juice Bars that might be the hidden gem of the project.  A wide-open instrumental, supplemented by a sparse guitar rift becomes a lyrical playground for breathtaking wordplay and bewildering flow.  Again, Cozz taps into the power of his label, sounding almost earthgang-like on the hook and the intro snippet.  However, once the first verse hits, he makes it all his and absolutely bodies it.  The slick-talking here is beyond commendable, and highly quotable. (“Nothin’ but a picnic in the park/I pick a beat then I pick it apart/Until I’m livin’ with a picket fence in the yard.”)

Fortunate is a superb project.  Each track is listenable, and function as a solidified, cohesive group.  Cozz is not afraid to tackle complex topics such as a violent upbringing, family relationships, and addiction with detailed storytelling.  Be sure to listen in the right order, and enjoy seeing another rising Dreamville star continue to blossom. You can find Cozz and many other top-tier artists on the updated Today’s Hip Hop Spotify Playlist.