In early June, San Antonio rapper Mike Dimes dropped the remix to In Dimes We Trust hit Home, featuring JID.  Dimes has blown up this year, rapping up a lengthy tour with Earthgang.  Turning to another Dreamville giant, Home (Remix) is an unparalleled juxtaposition of Dime’s steady Houston-influenced delivery, and JIDs AK47 delivery.

Honestly, I’ve been selfish with this track.  It’s one that I’ve wanted to share my thoughts on for a while, but that I needed to hold close first.  That’s how special I believe JID’s verse is here. 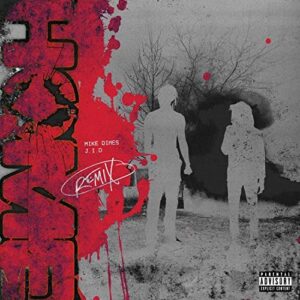 First off, lots of credit is due to Dime’s original.  The track is built on a dope beat from producers Zuri and cvleb.  With anthem-like qualities, the simplicity of the string melody contrasted by the complexity of the drum loop is venomous. 808s bang heavy, and Dime’s steady cadence and standout delivery feel right at home (pun intended.)

While Dime’s vocals fit the beat like a glove, JID choses to take a machete to it, with insane flow and a flurry of bars that personify why the East Atlanta standout is lightyears ahead of his contemporaries when it comes to cadence and written ability.  From a technical standpoint, JID remains the most talented emcee in the game; and the scary thing is his abilities as a storyteller have steadily improved.

JID’s verse on Home is not a lesson on lyricism though, it’s a masterclass in complex rhyme schemes, flow and punchlines.  JID has often credited Lil’ Wayne as a major influence, and the connections are obvious on this joint, although, with all due respect to a great, JID is quite simply better at it than Wayne.  Let’s take a bar by bar look at the verse.

Behind the Bars: JID – Home Remix

Check a n*gga chain, go and get this shit over”

JID uses the first two lines to get settled in on the beat and introduce his insane cadence to the audience. “From the Six” refers to (678), East Atlanta’s area code.  He makes it clear that he’s coming for what’s his, and that stepping to a rapper of his caliber would be unwise.  JID recently claimed that his contemporaries are scared to work with him. 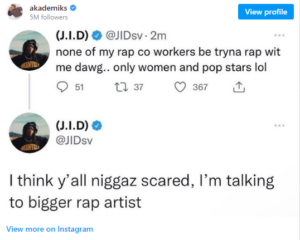 “Chevy or the Benz, he’ll prolly get the Rover

But, then again, all three what he get for a show

But he never sober, probally gon’ need a chauffeur

‘Cause he ain’t underground no more, n*ggas was gophers”

JID debates between three different luxury vehicles, stating that he earns enough to buy all three per live performance.  He goes on to state that even if he did buy all three of these cars, he’d need a chauffeur to drive them because he’s always under the influence, and he has a status to maintain now, even though it wasn’t always that way when he was on the come up.

This is the first segment where JID technically outclasses what anyone is doing in the rap game right now. The word music he generates off the sequence of words, “Rover/show/sober/chauffeur/no more/gophers is a superb use of internal rhyme. The gopher punchline, exhibiting just how underground he was is impeccable.

Twenty-four plus more, my drive Kobe

Give and go, the flow is my only

One of a kind, you not Obi-Wan Kenobi”

Here, JID twists the gopher rhyme scheme, matching it with pole/polar.  These two punchlines back to back are unfathomable, as here he states that women want him across the globe, while also referencing how crazy they are.  He might also be alluding to Kanye’s struggles with bipolar disorder, as he drops Ye’s name in the next line.  He references Kobe’s jersey number, pairing it with the basketball linked phrase give and go, and ends with a vicious star wars reference.

JID is associating himself with Anakin Skywalker, a claim that means he’s different, and by discarding Obi-Wan, he’s essentially stating that no rapper exists in the game to challenge him.

Again, the internal rhyme is so well crafted that his flow seamlessly cuts through the beat.  Pour/four/twenty-four/more & Go/flow/only/obi/kenobi all work together to link words and effortlessly navigate the beat with rapid flow.

“Many have tried and failed, parking lot full of shells

When hammers are flyin’, wear a disguise, you not Loki

No Avenger friends, we not homies

JID’s wordplay here relies on Marvel characters Thor and Loki, with double entendre of hammer’s flying referring to the latter, and the disguise touching on Loki.

“Really, you jokin’, I don’t know what these n*ggas smokin’

That shit potent if you thinkin’ I ain’t the dopest

The whip ghostin’, the fit, Gosha, the hip Olsen

Twin clips, lil’ nigga, you could get both of ’em”

JID claims that if you don’t think he’s the best out, you must be high.  He references the Olsen twins, stating he has matching guns on each hip, and that the wrong move could see an enemy facing both of them.

Gettin’ dirt off of my shoulder, I’m gettin’ older

Way out in Budapest, from the Crest Boulder

I’ll be there if you lookin’ over your left shoulder”

An ode to Jay-Z, JID places the rap icon’s nickname as his last name, and references two of his most famous tracks, Takeover and Dirt off your Shoulder.

“Way out in Budapest, from the Crest Boulder

I’ll be there if you lookin’ over your left shoulder

JID speaks on how he has people with him all over the world, who have his back should things go wrong.  The G’s move in silence line starts in a familiar place for rap fans, but he takes it to a new place by referring to people being tone deaf, to the point where they can’t even hear the musical note of G.

The beat slows down in this portion, and JID corrects his pacing to perfection, which allows him to come out of the tempo change at full speed.

“Tone deaf, my songs is bein’ slept on

Shawty wanna take off her thong, jump in the bed

I don’t know her but I’m thinkin’, “Oh well, give me your cell phone”

Cellulite on her ass, titties was silicone

In the land of Atlanta, I love bein’ home

I wanna seat on the throne, I ain’t gon’ leave it alone

‘Fore all the people is speakin’ out, let’s even the score

Knock on the door, it’s a shotgun, you peepin’ a hole

I’m undefeated, you want a feature, I’m eatin’ your soul

My sister a killer, she be shootin’ out a Kia Soul

Wanna get the kid, that probably cost a couple kilos

Me and Mike rob you for your dimes, like deebo”

The back half of the verse becomes a bit less complex as far as language, and not quite as ripe with punchlines, but the unfathomable flow and vocal tendencies are upheld as JID paints a clear vision of his hometown, assures rappers he’ll “eat their soul” on every feature, and speaks of a time where he used to have to sleep on the floor.

With his highly anticipated album The Forever Story delayed simply by sample clearance, watch for more from the Dreamville superstar very soon.