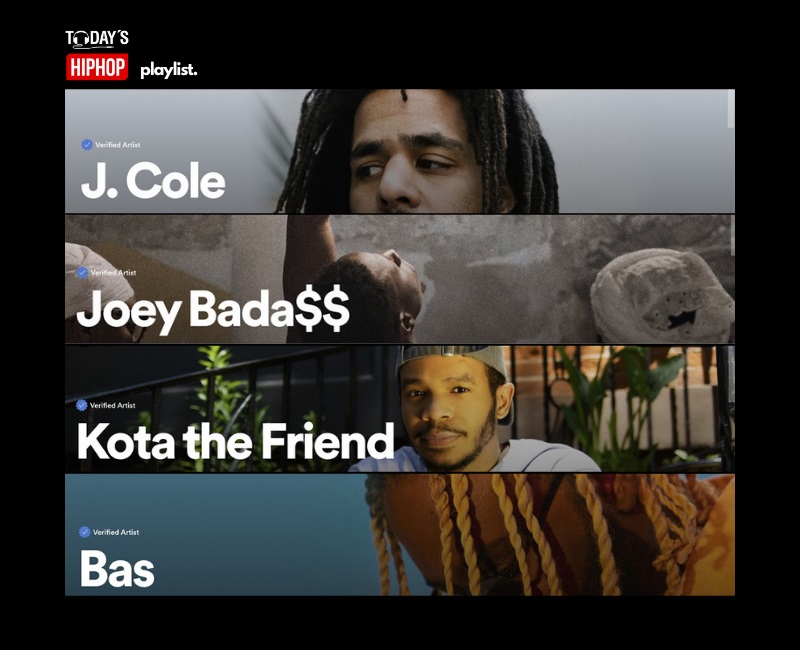 With 3,000+ listeners, and new heat being added regularly, TodaysHipHop is a must follow, showcasing tracks from some of today’s top hip hop artists in the Chill Lyricist category, including J Cole, Saba, Bas, Joey Bada$$, Kota the Friend, Smino, Isaiah Rashad and more.  As always, The Today’s HipHop staff will be performing regular playlist updates and expanding the compilation to showcase the freshest out, and will be considering submissions from labels, managers, and artists.

You can sample the playlist below or check out the official playlist on Spotify.  We hope you enjoy our newest additions to the playlist which have been added with your listening experience in mind.

Fans of VH1’s show Signed might recognize Marcellus Juvann’s name from the show’s 2017 season, but the Houston rapper has much more to offer than a reality TV type persona.  There are certain tracks that feel timeless, and if you looked back at my private Spotify playlists over the last four years, you’d fine Thin Line on many of them.

You’d be hard pressed to find a more nostalgic sample than the intro melody to Gladys Knight’s Love Finds Its Own Way and Atmosphere famously featured the same melody in the heart wrenching 2008 track Yesterday, which memorializes his father.  Juvann taps into the same magical rift, but slows it, creating an ambience that is equal parts bright and dark, optimistic, and sentimental.  Lyrically, Thin Line is a masterpiece; The 4th & Broadway (Island Records) signed Juvann is a down to earth, relatable, and thoughtful narrator; sifting seamlessly through topics such as black oppression, social media infatuation, and the struggles of a penurious father.  Marcellus solidifies his masterful verses with a universal hook, rap-singing “It’s a thin, thin, thin line between/responsibilities and your dreams/everything ain’t what it seems.”  With a new single out, and more new music on the way, Marcellus Juvann is a need-to-know name at the verge of mainstream.

DC rapper GoldLink was propelled into the spotlight with a flurry of prominent features, and a unique sound that followed Wale’s lead of utilizing sonic elements of DC’s unique go-go movement.  A prolific creator, it is easy for fans to connect with the many different sounds of GoldLink across his expansive discography.

Pray Everyday might be GoldLink’s most profound work, backed by a wistful piano lick, booming bass, and gorgeous gospel vocals.  The track takes a careful listener on GoldLink’s personal journey through faith, and the many vices that may have turned the artist to spirituality.  He has also been quoted as claiming that the idea behind this track was the fact that he and his friends all put their life into rapping, and years later he is the one with the fame, fandom, and money to show for it (hence his survivor’s guilt).  This is an incredibly thoughtful piece of music, but even more so, an artfully composed one.

The second single released from upcoming album Memo did not disappoint.  Kota is hitting on all cylinders right now, releasing track after track the slaps, prepping for his Flight Night Festival, and opening his FLTBYS retail location in Harrisburg, PA.  Needs is a reminder that the extracurriculars are not going to take away from Kota’s true gift; the unmistakable ability to make impeccably arranged, meaningful tracks at every stop.

Needs reveals a side of Kota that is almost full circle from former lyricism that embraces flaws, personal growth, and struggle, to reveal a figure of a man who has finally acquired the inner peace he has so clearly sought.  This manifested nirvana allows Kota to realize that he has earned everything that comes with his stardom, and that taking the hard path of confronting demons along the way has paid off.  Kota has been leaning heavily on spacing, and more intricate adlibs, both in the first verse of Needs and ’96 Bulls, creating a full sound, and an almost back-and-forth internal conversation.  In an Instagram story outlining MEMO , Kota had these two tracks paired together, which makes great sense as there are lots of complimentary features in each, and a full story told, with ’96 looking more at the challenges, and Needs focused on the paradise Kota has reached navigating them.