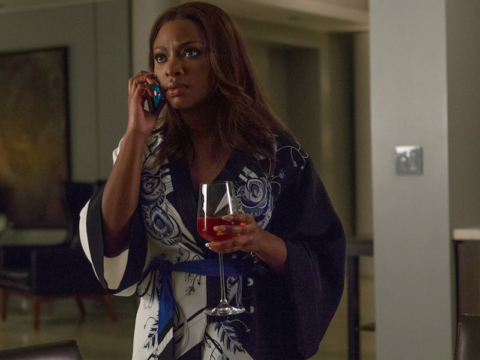 In the 9th episode of Power, Greg discovers who is the mole in the Feds and Jamie & Tasha make up. If you missed episode 8, make sure to read the recap.

After seeing Tommy going to Milan’s warehouse, Jamie is not sure if he can trust Tommy. Jamie questions why Tommy didn’t pick up the phone when he called him. Tommy explains that Milan was giving him a tour of the warehouse. This leaves Jamie with some doubt of Tommy’s truthfulness.

Angela turns on the cell phone Jamie took from Hugo. Angela texts one of the numbers that’s used more often. Double Agent Mike receives the text and decides to call. When Angela picks up, they both realize they are in the same location because of the background noise.

The Feds investigate Tommy’s mom, Kate. Greg snoops around the apartment looking for proof that Tommy killed Lobos. As Greg leaves the apartment, he finds Angela’s business card in the garbage can.

Tariq tells Dre that he hung out with Slim aka Kanan. Dre tells Tariq to be careful of Slim and not to get too close.

Ruiz gives Tommy a partial payment for the drugs. Tommy advises against this and Ruiz requests a meeting with Milan.

Saxs tells Angela that the internal investigation is about to be over. The Feds found evidence that someone [Proctor] searched the system to determine Lobos’ location. Angela tells Jamie that the Feds are onto Proctor which will lead back to her. Jamie reveals that Greg was at Kate’s house which puzzles Angela because Greg isn’t on the Lobos case.

Angela meets with Greg to find out what he knows. Gregs claims that he is going to stop investigating Jamie due to the surveillance tape and Tommy’s alibi. However, in the middle of the night, Greg wakes up and digs thru Angela’s purse. He finds the phone that was on Hugo and takes down the information.

Tommy reports back to Milan about his dealings with Jamie. Milan reveals that Jamie has been watching Tommy, which disappoints Tommy. Milan tells Tommy he is holding him responsible for Jamie and will kill Tommy if Jamie doesn’t stop investigating him. Tommy confronts Jamie about why he’s been following him. Jamie promises to stop but as soon as Tommy leaves Jamie goes back to investigating Milan.

Ruiz calls a meeting with Greg. He tells Greg that he will be meeting with Milan. Greg wants to know if Ghost is going to be there. Greg asks Ruiz to wear a button recorder which is totally untraceable. Jamie tells Ruiz to ensure that neither Tommy or he are mentioned when Ruiz wears the button recorder.

Concerned that Tariq and Kanan are becoming besties, Dre meets up with Tommy. Tommy makes it clear that he does not like Dre. Dre reveals that it was him that told Jamie about the Korean Kartel hit on him.

Tariq and Kanan take a trip to a sneaker store. Kanan convinces Tariq to steal a pair of $250 sneakers.

While Karen Bassett gets a walk thru of the new club venture with Andi and Albert, a police raid takes place. The police arrest Andi and Albert when they find drugs in the club’s ceiling. [Julio planted the drugs the night before.]

After seeing Jamie do a great Career Day presentation, Tasha congratulates Jamie on being successful with his club venture. This leads to Tasha and Jamie having make-up sex. After sex, Jamie reveals that he and Ruiz are working together to take down Milan. This news frightens Tasha and she calls Tommy to alert him to this fact.

“You need to find out what’s going on with Ghost and you need to stop him.” – Tasha

After Ruiz leaves the meeting with Milan, Tommy offers Ruiz a ride home. Tommy speaks in riddles about how Ghost betrayed him fueling his anger. Moments later, Tommy kills Ruiz. Dre shows up to help Tommy get rid of the body.

Tommy confronts Jamie about his plan with Ruiz. He confesses that he killed Ruiz. Jamie tells Tommy that he wants out of the game. Tommy tells Jamie to stop planning to take Milan down because he’s going to come up with a plan.

The episode ends with Tommy telling Milan “we need to kill Ghost.”