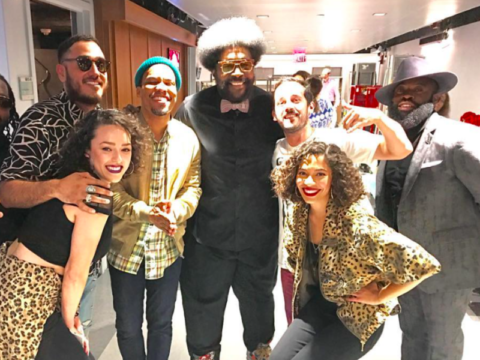 Philadelphia rap group The Roots may have pulled a fast one on the next president of the United States. The hip-hop collective sent a subliminal toward Republican presidential candidate Donald Trump during a “The Tonight Show Starring Jimmy Fallon” appearance.

According to reports, the Roots relied on their music to dig at the Trumpster Thursday (September 15) night.

The Roots, the “Fallon” house band, play a song to introduce the entrance of every guest on the show. The song they choose for Donald Trump’s entrance was Erykah Badu’s “20 Feet Tall” (from New Amerykah Part Two: Return of the Ankh). As Trump entered, the Roots sang the lines “Then you, you built a wall/ A 20-foot wall / So I couldn’t see,” as Think Progress points out. This seemed to mock Trump’s campaign promise to force Mexico to build and pay for an enormous wall along the U.S.’s southern border. (Pitchfork)

The tweet was in response to a post responding to one of Trump’s tweets with a video clip of Ice Cube and the line “@IceCube Hillary’s not solving the problem, she’s just making it worse!” — Endorses @realDonaldTrump,” a rep for the rapper told the Daily News. (New York Daily News)