5 Things You’ll Love About NBA 2K17: “The Whole Concept Is To Put All The Control Back Into Your Hands” 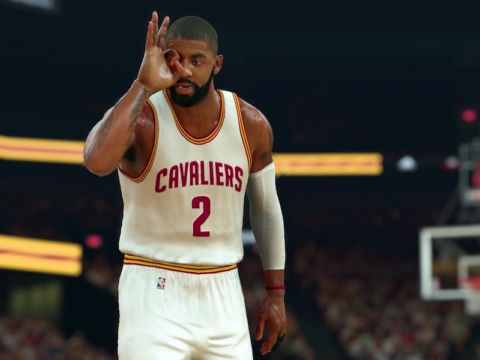 At the heart of what we do at NBA 2K, the game simulation has always been the most important thing to us. In the past couple of years, ever since we kind of exploded with NBA 2K7 and then NBA 2K11 with Michael Jordan and NBA 2K14 when we came to the new systems, we’ve started really trying to refine a lot of things.

Over the years, what you may have noticed is team strategy and plays have really become detailed to what you see in real life. You can pay the game and be like, “Wow, that’s the Warriors. That’s exactly what the Warriors run.” We’re at that point where we’re trying to build something that’s obviously founded in the NBA but we’re also evolving.

The Park feature has really blown up for us. People play it in My Career. In My Career you only have control of one guy so that needs to feel and be perfect. Then in The Park, you’re with your other friends and you all are controlling your individual guy. So some of the feedback you’re getting is, “I love all of the signature stuff but some of this feels canned,” so last year we had signature size-ups on the right stick and what you would do is flick the stick up real quick and the size up would look really like Chris Paul or Jamal Crawford. Whoever was doing it had their own specific move. You could break out of it but it still played automatically. So now we made it so you could do those size-ups on your own and without the animation to do it for you. The whole concept is to put all the control back into your hands. We made the user’s skill and ability to be above “Hey I’m playing with Kevin Durant and Steph Curry.” So if you really get to how to play the game, then you’re automatically are better than the next guy based on your stick skills.

We’ve done a lot of work on the shot stick. The shot stick has always allowed you to control layups and dunks. But one thing we always wanted to control is what hand you finish with. What side of the rim are you taking? Not just flicking right to get this layup or flick left for this layup. Flicking the stick now gives you a lot more options. The game no longer forces you into directions. We’re giving you control over release timing. Now you can be better than the next guy just because you understand the game better.

Rebounding feels organic now. You’re playing it and it feels physical. We’re saying the same things people outside are saying. Steals have always felt random by swiping. But now if a guy exposes the ball and you time it right, you’re actually knocking it out. So if the guy is just standing there and not moving and you do a bop, then you’re off to the races for an easy layup. Blocking shots feels really good too. You can chuck people as they go through the lane so it’s not just clear sailing to score. There’s a lot of little things to basketball that are now taking form and feel exactly the way we expected them to feel. We also added more situational motion. Defenders are moving, players are cutting at the right time. We wanted the movement, even off the ball, to show an understanding to what you’re trying to do. Now we’ve expanded that to kind of going all over. Look at how guys screen and then move. All of that is exactly real basketball movement that we’re trying to capture. We’re not just using a motion system to move from point A to point B, guys know what they’re supposed to do.

The post 5 Things You’ll Love About NBA 2K17: “The Whole Concept Is To Put All The Control Back Into Your Hands” appeared first on SOHH.com.

5 Things You’ll Love About NBA 2K17: “The Whole Concept Is To Put All The Control Back Into Your Hands” : SOHH