Streaming Is Finally Bring Money To The Music Industry 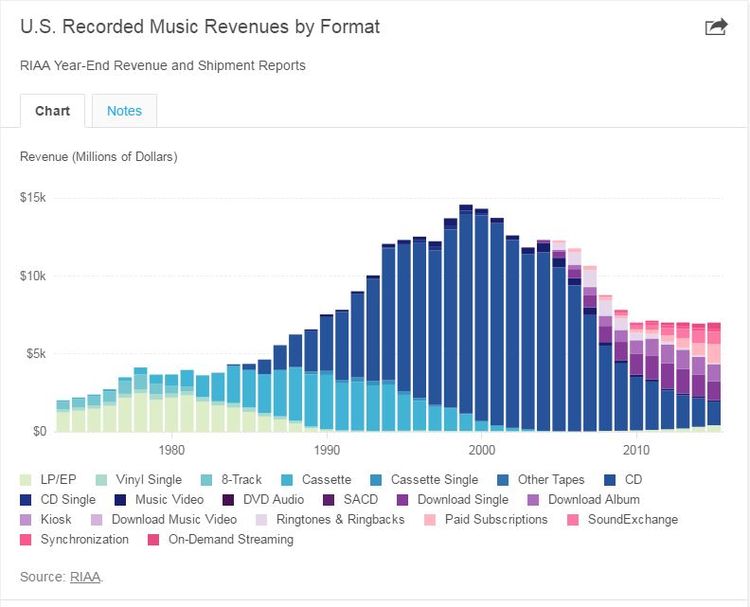 With nearly twenty years of sharp decline as a direct result of piracy and declining prices, the music industry has recently shown signs of recovery. Spearheading the way to profitability via streaming are Spotify and Apple Music.

Recorded music revenue increased by 8.1 percent to $3.4 billion in the first half of 2016, according to a midyear report from the RIAA. The US music industry is slated for growth for the second consecutive year; this marks the first back to back growth since 1998-1999.

Music streaming is credited for the recent growth trend — services that gives subscribers commercial-free access to millions of records for a monthly fee — or free with ad supported content. U.S. streaming profits saw an increase of 57 percent to $1.6 billion in the first half of the year, accounting for almost half of recorded music sales and countering shrinking album and singles purchases. Music streaming subscriptions totaled nearly $1.01 billion, according to the RIAA.

“We’re starting to see on-demand music streaming as no longer a thing that hipster college kids and young people do,” stated Larry Miller, a professor that teaches music business at New York University. The direct results can be witnessed via the financial reporting of major music companies. Universal Music Group reported growth in the first-half of 2016, while through nine months ended June 30, revenue at Warner Music Group grew 8.5 percent to $2.41 billion, accord to filings. Sony Music also reported growth in its latest quarter.

The industry is still a bit hesitant to scream victory. Yearly sales have floated around $7 billion for the past six years, nearly down by half from 1999, according to the RIAA. At the present time labels are still negotiating new contracts with Google and Spotify, two of the world’s largest streaming companies. Sales from ad-supported, on-demand music streaming grew 24 percent to $195 million in the first half of 2016, according to RIAA reports. However, those services aren’t doing such a great job of convincing potential consumer to pay for music and is not making enough money off of free subscribers, according to record labels.

Steve Jobs, co-founder of Apple Inc. convinced major record labels that iTunes would save the industry from piracy, only to decimate album sales while promoting and selling singles instead.

Apple is no longer the only player in the marketplace regarding digital music. Spotify is the world’s largest paid music steaming services and has showed no signs of fatigue since Apple Music’s inception. Majority of the users for Apple Music are people new to paid subscription based services, not former Spotify subscribers, according major label executives. Purchases of music, be it CDs or downloaded content, is continuing a steep decline. Physical music sales declined 14 percent while downloads shrank by double digit percentages.

The arrival of new entrants complicates things, depending on whether they attract new subscribers or poach from established services. The world’s largest internet retailer, Amazon Inc, has invested in a paid music streaming service to sell other goods on it’s site. The retail giant has recently introduced it’s streaming service (Amazon Prime Music). The world’s largest online radio service, Pandora, will also introduce a paid, music streaming service by years end. It’s projected to convert around 10 percent of it’s 78 million free subscribers into paying customers within the next four years.

Streaming Is Finally Bring Money To The Music Industry : The Source