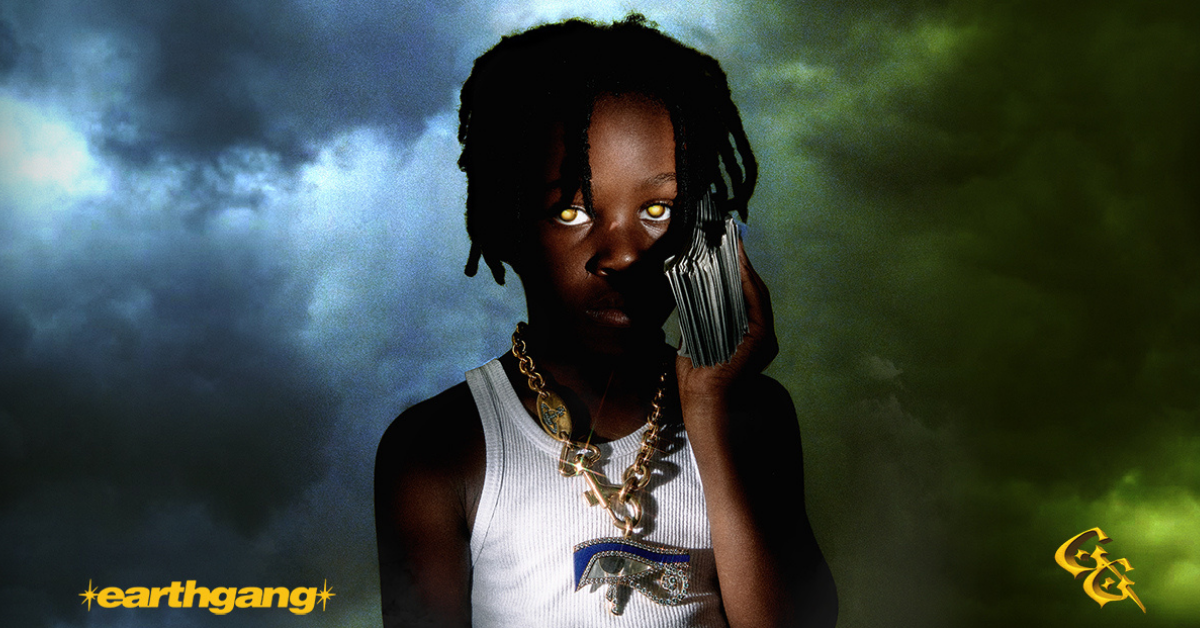 Earthgang’s Ghetto Gods was certainly worth the wait.  After several delays, Doctor Dot (Wowgr8) and Johnny Venus (Olu) finally unveiled a stunning album full of thoughtful commentary, nostalgia, and southern roots.  An array of potent, well-placed features bolster the project, but do not detract from the artistry and identity of Earthgang – a wedding party of sorts to the duo’s holy matrimony.

Above all, Ghetto Gods is Atlanta.  It captures the city’s charms and pitfalls, the same contrasts that Olu and Wowgr8 explore within people.  2 Chainz, one of Atlanta’s most beloved rappers, sets the tone for the album on the intro, Glow, laying out a theme that Earthgang return to again and again: [“Ghetto Gods, diamonds in the rough/You know it’s hard to see the greatness when they tell you, ‘You ain’t gon’ be shit.’] The concept of “starting from the mud”, ascending to a position of status, and then navigating the new challenges success brings are central to understanding Earthgang’s message.

Aesthetically, Ghetto Gods leans into its identity as southern rap, without sacrificing Earthgang’s eccentric definition of the genre.  Beat selection is bass heavy, and expressive, with ample space for the rapper’s prolific, word heavy style.  There is cohesion, and progression within the album as well – the first half of Ghetto Gods is especially hard hitting, with the first four tracks presenting the loudest noise, the biggest features.  While critics may claim the second half of the album loses steam, or drags on too long, instead, it speaks with a more delicate, articulate voice.

Let’s not get it twisted though, tracks 2-4 go incredibly hard.  From the lively chords of title track Ghetto Gods to the playful bounce of Billi (featuring a heavy verse from Atlanta collaborator Future), Earthgang unquestionably came out the gate swinging.  The highlight of this “first section” though has to be Waterboyz which features Dreamville’s heavy hitters J.I.D and J.Cole.  In a throwback to early Spillage Village x Cole joints like Can’t Call It, when these four legends are in the lab together, magic happens.  Backed by an intricately layered, luxurious instrumental with heavy bounce, Waterboyz is an exhibition on how to murder a beat. Tied together by one of the best hooks on the album, Olu and Wowgr8 always seem to elevate themselves when the talent on the mic around them is amplified, and Johnny V especially shines on this joint.  However, as they tend to do, JID and Cole steal the show. JID’s verse is earthy, encrusted in elements of R&B dubs, and Cole quite simply spits hot fire.  [“No more Off-Season, it’s capital B on my car season/If I happen to be in the mall and you catch yourself lookin’ at me then you’re stargazin’.”]

Despite the star power on Waterboyz, the track in no way steals the shine from Earthgang, who find a different type of stride on the second half of Ghetto Gods.  Previously released singles All Eyes on Me and American Horror Story are obvious high points, the latter perhaps the most well-written offering of the album.  Exploring atrocities experienced personally and by black culture, American Horror Story tracks the rise from dire conditions in Westside Atlanta, to the success the duo now experience.  This thought process draws clear parallels to 2 Chainz narration on the introduction. It also warns black artists who have made similar rises, to not lose touch with their roots: [“Some of y’all niggas so woke, it’s ironic/You really be ignorant ’cause of your knowledge/Look down on your brother ’cause you went to college.”]  Growth is a good thing, but in no way should lead to looking down on those who have not risen.

All Eyes On Me serves as more of the central anthem of the album – more of a tempered take on social commentary, and very mainstream polished.  Power is another highlight, employing the talents of Nick Cannon, and another ATL legend CeeLo Green.  Earthgang will join J.Cole for Dreamville Festival next month, where they will surely showcase much of their new music.

Ghetto Gods is a masterful blend of southern fusion, using the faces of Westside Atlanta as a portal to access the greater challenges of modern society.  And Earthgang approach these issues with their unique musical talents while fully embracing their identity as Atlanta’s premier rap group.