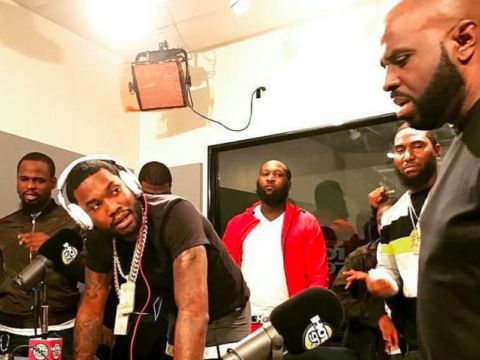 Back in August, Flex publicly aired out Drake on his Hot 97 show.

“70 percent of your fans wear high heels,” Flex said in response to the idea of Drake making him lose his job. “The other 30 percent are guys who wear sandals. I’m not concerned about you, bruh. I’m just not concerned. I’m sorry. … If you have help on your music and on your bars to compete with that Top 5 [lyricist] movement, that is an issue, to me. It’s not an issue of whether I want to buy a ticket to his concert – I always want to buy a ticket to his concert – we are talking Top 5 and that’s where the problem comes in. I want to talk about the Meek [Mill] situation and that’s why he wants me fired. I’m going to tell you why he wants me fired. I know no one has really wondered why the reference tracks have never really come about. So, I’m going to paint a picture for you. He’s asked to do a guest appearance on Meek’s [Dreams Worth More Than Money] album. He does the verse but in listening to the verse, everybody’s wondering, in Meek’s camp, if he’s going at him – ‘are you sublimining me on my own song?’ That’s what’s wondering – there’s little references in there – in doing that, he then gets pressed like a hashtag on the verse. This is before we hear anything or see anything and I’ll say his people who aren’t his people anymore. At the time they were his people – he lays the verse on the song, he gets pressed and questioned, his team, they punk panic and give up the reference track to say, ‘Whoa! He didn’t write it. ‘This’ guy wrote it.’ That’s how this came about. You know I know this story punk! Now, in the panic mode – that reference track floats up. But then, that same dude has a few more – now it’s out of control. In reality, you coughed up that reference track not to get pressed and everyone goes, ‘Whoa! Wait a minute? This guy’s not writing.’ It’s OK if you don’t write, if you’re an artist or a singer – but to be in that Top 5, it’s a different thing. Now he knows I know this story, he’s wondering when I’m going to tell it. OK, you want to push me?” (Hot 97)