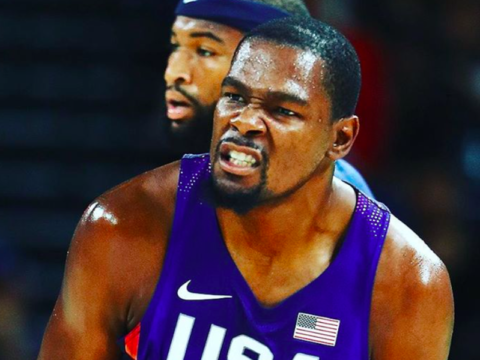 Golden State Warriors‘ Kevin Durant has broken his silence on adding a few new musician-inspired tattoos to his body. The NBA superstar addressed the headline-generating ink jobs this week.

In a new interview, KD admitted the public spotted his tribute tats ahead of schedule.

“Rick James,” KD said when asked if his latest tribute artwork was him paying homage to the late singer or Comedy Central’s “The Chappelle Show.” “Yeah, my earliest memories of music was grandma cleaning the house listening to Rick James, Sam Cooke, Teddy Pendergrass, so that always caught my ear. There’s a lot more tattoos coming but you weren’t supposed to see the first two.” (“Any Given Wednesday”)

Earlier this month, buzz developed about Durant getting a Rick James tat.

Back in July, Durant briefly addressed his now-infamous 2Pac tat.

“Aw, man, you weren’t supposed to see that,” Durant said, sheepishly, as if he had hoped to keep the image hidden under tights and socks, or planned a grand unveiling at a later date. The next day, however, Durant left the tattoo exposed for anyone to see and even offered an explanation for how Shakur’s lyrics helped inspire the body art, even if the Notorious B.I.G. was his all-time favorite rapper. (Yahoo! Sports)

Over the summer, a picture of KD’s huge 2Pac tat started to make its rounds across social media.

Durant is a huge Pac fan, I just learned. Biggie is his favorite but he is supremely impressed with Pac's mind at such a young age