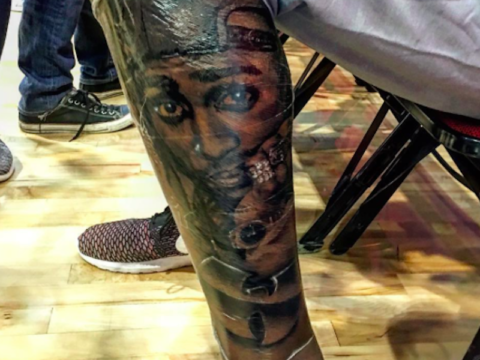 A picture of KD’s huge 2Pac ink job has started to make its rounds across the Internet.

Durant is a huge Pac fan, I just learned. Biggie is his favorite but he is supremely impressed with Pac's mind at such a young age

A few days ago, KD responded to criticism shot his way from former NBA legends Charles Barkley and Reggie Miller for leaving the Oklahoma City Thunder to join the Warriors.

“Those are two guys, you know? TheyÔÇÖve got a voice in our game, and a lot of people probably felt the same way, but they donÔÇÖt have a voice so obviously what they say is translated through a megaphone so it feels like everybody else, you know? If Charles Barkley said it, it must be true. If Reggie Miller says it, it must be true. It just feels like itÔÇÖs bigger than what it is. But they have such a big platform and people respect them so it feels bigger than what it is. But for the most part, I got the support around me. IÔÇÖve got the family that supports me no matter what, that love me no matter what I do. I could be playing tennis right now, and I could retire from the game of basketball and theyÔÇÖre still going to love me. So if I think about that, IÔÇÖll be fine.”

“I’m just disappointed from a competitive standpoint because it would mean more to win one – just like it meant more to win one [championship] in Cleveland, it would mean more to Kevin to win one in Oklahoma than in Golden State. I’m not going to hate on Kevin Durant – I was real excited when LeBron went back to Cleveland because I knew it would mean more to that city. If Golden State were to win again it’ll be like, ‘Well, we expected to win. We just won a championship two years ago. We just won 73 games.’ … I think it’s a scapegoat move. You can use any words you want to. I think it’s a scapegoat move to try to ease your way into a championship. Let’s be honest, Golden State is probably going to win a couple championships in the next three or four years. Just like when they put that Miami team together, they were going to win a couple of championships because at some point it’s going to work and they’re going to be better because all these other kids are going to get weaker at some point also.” (“Mike & Mike”)

A few days prior, R&B singer Tank addressed the backlash KD received over joining the Warriors.

The post Kevin Durant Gets Massive 2Pac Tattoo But Gives Edge To Notorious B.I.G. appeared first on For The Best In Hip-Hop News – SOHH.com.