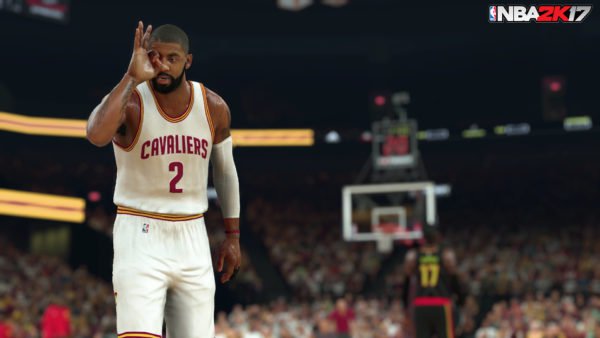 Talk about flawless victory, 2k sports have outdone themselves on the basketball video game world with their latest installment of NBA 2k17.

If you can name one song to describe the latest edition of NBA 2k17, Jay-Z & Young Jeezy’s classic album cut “As Real As It Gets” has no choice to come to mind as 2k developers delivered a huge slam dunk for their fans. The main word to describe the experience of playing this hit making video game has to be authentic. NBA 2k17 has done a incredible job of creating a moment sports and hoop fans look forward to. With his amazing soundtrack curated by OVO’s hit maker Noah “40” Shebib, NBA 2k17 provides fans the ultimate video gaming experience which appreciates the raw, athletic and charismatic attributes they accommodate for today’s NBA superstars.

Gamers can appreciate the authenticity and raw display of high intense hoops action that you see when you watch NBA on ABC or ESPN. The ability to lose a defender to a signature crossover made by Kyrie Irving, the super duper sky high floater being thrown up by Stephen Curry, the freakish athleticism Lebron James displays are just a few eye openers fans can get excited for. In addition, if you wanna live out the Coach Popovich dreams, this game presents the fans the opportunity to automatically run sets, set screens, make back door cuts and create opportunities for teammates to score off of the dribble and drive instead of having them stand in motion. The only “miss” about this game is the frequent foul calls the refs made which can be a real air ball for fans who wanna get a good flow of the game.

With dope additions such as halftime dunking showcases and player celebrations, NBA 2k17 lives out the ultimate NBA fan experience whenever you see your favorite team suit up. Deep features such as 2kU and the rare in game involvement of legendary Duke University coach Mike Krzyzewski is what basketball fans appreciate alot as 2k did a phenomenal job of paying homage to a great basketball icon. Even though you are forced to watch every scene in this year’s MyCareer mode, director Spike Lee and Creed’s own Michael B. Jordan provides a magnificent job of showing hoop fans the process and journey of becoming a hoop legend.

Overall, many people thought 2k16 wouldn’t been outdone but NBA 2k17 delivered a 360 slam dunk with this performance. Make sure you go and get it to experience a dope video gaming experience at its best. Make sure you have your favorite drink with you because once you get your hands on it, there’s a slight possibility of not letting go for a while.