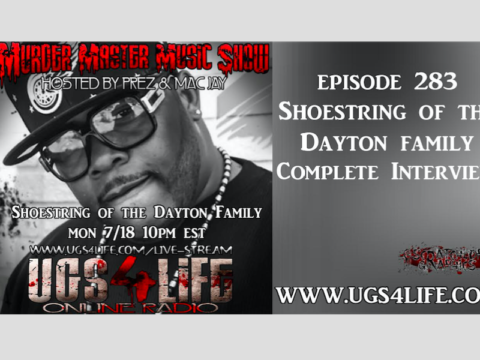 [In the 90s the Dayton Family was one of the most respected groups out of the Mid-West. After MC Breed, they helped put Flint, Michigan on the map and rapped about real life situations that they were going through, such as with the classic album F.B.I. (F-ck Being Indicted). Recently we had Shoestring on the Murder Master Music Show to speak on the Flint Water Crisis, his new solo album “Fix My City”, and much more!]

The world has been looking at Flint Michigan , we have been going through a water crisis and the crime rate is real high. I know me and Bootleg was the voices on the city and I know we haven’t had a word on it yet, so since my city was going through so much drama I named my album “Fix My City.”

There is a Doctor who noticed the kids had high lead levels, breaking out in rashes, and people have passed. That water is doo doo brown. I get ready to take a bath and look in the tub it’s doo doo brown. I can’t take a bath in that shit what are they trying to kill me? Obama came down here and said the water is drinkable, but we don’t even drink that. The whole city drinks bottled water. They promised to fix the shit they only did a few pipes, they ain’t moving fast!, I think they want Blacks up outta here. Governor Snyder is a dirty mutha fucka, he been knowing about the water crisis for a couple of years!

Inside Look at the Gathering of the Juggalos

ICP introduced me to a fan base that is so loyal. It’s an event that you have to go to. Even looking for the event you are in the middle of nowhere driving through corn fields, like where the fuck we atr? You finally get to that mutha fucka there’s go carts, it’s like a carnival, restaurants, girls walking naked. There is so much shit going on and so many groups like Ice Cube, E-40, and MC Hammer turnt that bitch out with about 100 strippers on stage. He rocked that mutha fucka. There is 1000s of tents there, imagine all the f*ckin’ going on there?

On Backstabber being indicted by the Feds

When we did FBI that is why it was so heartfelt because we went through that sh*t for real. When they took Bacxkstabber away, he was out Eazy-E, he was our Master-P! He was holdin’ the street down, but when they indicted Backstabber it was like they took the whole crew down.

The Life and Death of Boneskalness of the Skanbino Mob

If that n*gga got on yo a** you had trouble. I hated to see my n*gga go. When he died you couldn’t even get to the street, I had to park four streets over. The whole city had to come out. When he died Don Diva Magazine came down here and did a story on him and everything.