The Standout: 21 Savage Provides A Chilling Outlook On ÔÇÿNo HeartÔÇÖ 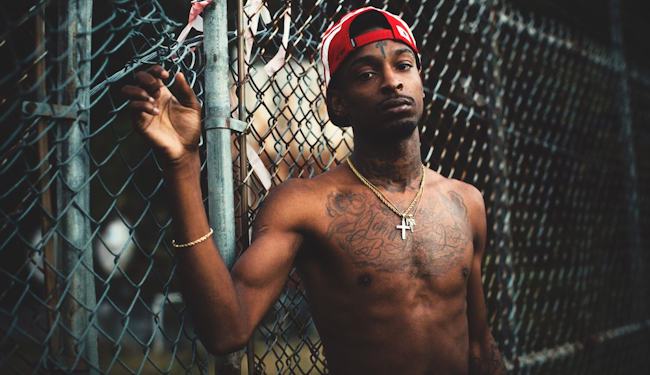 Via Cam Kirk/King Me Collective

Listening to albums is a full time job. Every day, new bodies of work flood iTunes and your favorite mixtape sites. I love the process of giving an album a spin from start to finish. ItÔÇÖs like test driving a car: wavering back and forth between committing and seeking alternatives with every turn. After a few listens, I tend to pick out favorites I religiously quote, place on playlists and recommend to friends.

The Standout is here to highlight one record from a particular album that fits the criteria above.

The 411: 21 Savage has had Atlanta on lock for most of 2016. He used 2015 to build up a strong buzz that consisted of mixtapes with thousands of views, videos viewed over a million times, and shows all across the South. If there was anybody to put your money on to blow up in ’16, it wouldÔÇÖve been 21. To solidify that, he did the best thing possible: teamed up with Metro BoominÔÇÖ for a short, concise album titled Savage Mode.

The chemistry between the two peaks very early in the album with the best example of this coming on ÔÇ£No Heart.ÔÇØ Metro BoominÔÇÖ wasnÔÇÖt just passing along FutureÔÇÖs leftovers like weÔÇÖve seen for other artists. This is one of the coldest Metro beats. ItÔÇÖs haunting and leaves me wondering what 21ÔÇÖs facial expression was when he first heard the instrumental.

The entire persona that 21 Savage possesses is why his music career works. HeÔÇÖs a real dude from the depths of ATLÔÇÖs mean streets, and heÔÇÖs not hiding it. He embraces his environment, even at the risk of glorifying his past activities. HeÔÇÖs enraged in a lot of his songs, but in a calm tone that only makes that rage 100 times worse. ÔÇ£Pussy n****s love sneak dissing ’til I pull up on ’em, slap ’em out with the fire,ÔÇØ he raps on ÔÇ£No Heart.ÔÇØ ÔÇ£Wet your mama’s house, wet your grandma’s house, keep shootin’ until somebody die.ÔÇØ

He uses a fairly hilarious and accurate depiction of how to address a hater, as well as what said hater might say as a rebuttal to mask his hating:

ÔÇ£I’ma at your favorite rapper, shoot him like I’m John Dill’ ‘I been with you since day one, Savage I ain’t even hating’ So what’s up with all that instagram shit? ‘Savage I was just playin” Y’all p*ssy n****s fakin’, bitch I hang around them Haitians Pull up on you, tie your kids up Pistol whip you while your bitch naked ‘Come on man, Savage you know I always play your mixtape’ Yeah n**** fuck all that, ask your bitch how my d*ck tastesÔÇØ

One of the drawbacks about Savage Mode is often the hooks. He evokes this repetitive style of employing the same few words in quite a bit of the album, but ÔÇ£No HeartÔÇØ showcases that he can do something catchy that doesnÔÇÖt rely on that method. The concept of having ÔÇ£No HeartÔÇØ is displayed in both the verses and the hook. Savage runs down a bit of his history in middle school such as playing football and putting that down by the time he hit 9th grade, which he describes himself as ÔÇ£knocking n****s out, n*****, like Holyfield.ÔÇØ

Savage Mode, as a whole, packs quite a punch. This is the album that serves as 21 SavageÔÇÖs breakout, but itÔÇÖs not his defining moment. HeÔÇÖs young and got plenty of time to develop his sound further if he chooses too. A record like ÔÇ£No HeartÔÇØ embodies all the potential that he has. MetroÔÇÖs production is an icebox, and 21ÔÇÖs lyrics are even colder than that. ItÔÇÖs a proper introduction track as well as one to add to his top tracks list. 21, 21!

Listen to “No Heart” below. Purchase Savage Mode on iTunes.