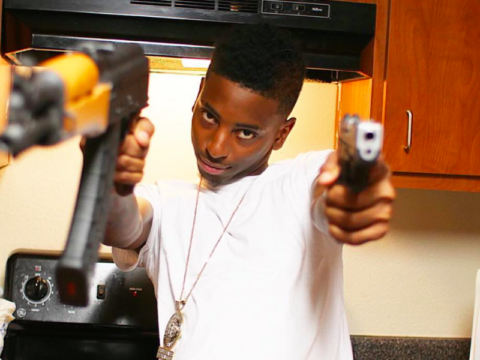 [With the Game and Meek Mill feud nowhere close to slowing down, viral star 22 Savage (previously Funnyass Mike) weighs in on how the e-beef is shaping up.]

Anybody is capable of anything. You can’t put it past anybody what can happen with the social media battling. I really don’t know what their backgrounds are.

Some people don’t do that social media sh*t.

22 Savage is on a mission to be the next great artist out of the Gulf Coast, representing for the new generation of music lovers. As a comedian and fun-loving performer, 22 Savage has taken the hard edges of his environment and incorporated a sense of purpose and business to everything he does. 22 Savage has been through it all and still manages to smile even with a murder trial looming in the future, he still manages to keep his head up and focus on music and keeping his fans happy. He is facing the possibility of life in prison or even the death penalty. He lost 2 of his best friends to gun violence including one getting killed right in front of him. He has been through several trials and tribulations. And he spells it out through his music. Whether 21 Savage or any other haters like it, the world is truly about to find out who 22 Savage is if they haven’t found out yet. His greatness will truly be found out soon enough by the whole world.