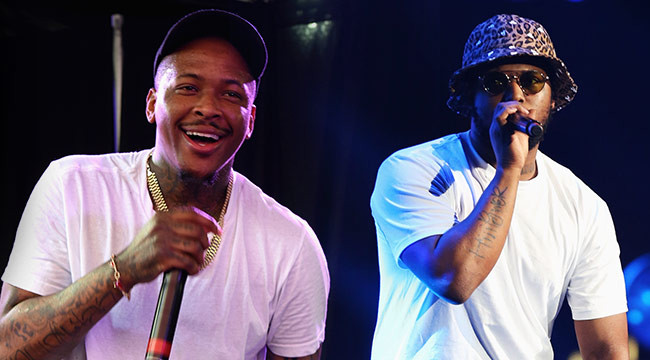 In an era where Donald Trump is a viable presidential candidate and where a black man bleeding out his last moments are being recorded after a police altercation are becoming commonplace, history could very well look back on these last few months of 2016 as being a fulcrum of real socioeconomic change. Hip-hop has never been shy about speaking honestly on current events and rap music as a whole is generally reflective of both positives and negative shifts in society through time.

And throughout this powder keg that is America in 2016, two unexpected voices have emerged. Previously known for waxing street tales and strip club ballads, YG and ScHoolboy Q used their latest studio albums to boldly voice their opinions on the current state of affairs

Picking up right where My Krazy Life left off, most of YG’s Still Brazy is a cocktail of weed, gangbanging, and other hood fables. It’s everything a listener expects from a YG album, and come December, it will wind up on the best-of lists for most credible outlets around. Furthermore, considering he manages to pull of all that ratchetry without an assist from Mustard just hammers home YG’s credibility as a solo artist, solidifying his starting spot on this season’s hip-hop roster.

But Still Brazy takes an interesting left turn for the final three tracks on the album. The trio of “FDT,” “Blacks and Browns,” and finally “Police Get Away wit Murder” each take deep dives into Mexican disenfranchisement and hateful rhetoric that has followed Donald Trump’s ascension to presumptive Republican presidential nominee and the notoriously poor treatment of African-Americans at the blood-stained hands of the police.

ÔÇ£Black, brown or pale, it don’t matter to me The only color that call shots in this world is green And at eighteen they want you to sign up for war That’s why most rather bang and hang around at the store So to you, it’s just another selling corn To me, we out here hustling for the mortgage Fuck you think we crossing the border for? Why you think in a bedroom there’s more than four? You explored my country but can’t accept my people But who you want to run your business? My peopleÔÇØ — Sadboy Loko on YGÔÇÖs ÔÇ£Blacks and Browns”

We’ve highlighted it previously but YG really deserves credit for using Brazy to dive into the anti-Mexican sentiment issue. Hispanics have been an integral part of hip-hop culture for decades but are notoriously underrepresented in the music and, by extension, so have the social issues that have plagued them all this time. For an outsider like YG to voluntarily step in and offer his platform is hugely impactful in bringing two communities together. In a way, it’s similar to the white people who stand for Black Lives Matter.

His sophomore release is a sonic departure from Oxymoron, and is a stylistic offspring of the To Pimp a Butterfly family tree. Gone are the party songs and weed ballads, replaced by a creatively free album full of gritty and dark rhymes, focusing its subject matter on the problems that plague L.A.ÔÇÖs urban youth. ScHoolboy puts a magnifying glass on the gang banging lifestyle and looks beyond the sex, drug, and hustling glamorization. Incarceration, paranoia, and police brutality are subjects that are vibrantly woven throughout many songs of the project.

As an artist and more importantly as a man, QuinceyÔÇÖs matured a lot since his last release and Blank Face LP is an exhibition of his mental growth over the last two years. On ÔÇ£Black THougHts,ÔÇØ he stresses the importance of unity between the Blood and Crip gangs, taking it so far as to credit his success story to TDE head honcho, Anthony ÔÇ£Top DawgÔÇØ Tiffith, a Bounty Hunter Blood from Nickerson Gardens in Watts, California.

HeÔÇÖs also made it clear that his first priority isnÔÇÖt music, even in his promo over recent weeks, he laments the time away from his daughter Joy. On multiple occasions, heÔÇÖs also admitted to wanting to reduce┬áhis touring obligations to spend more time being a parent to raise her instead of his own profile in music.

ÔÇ£I wrote these rhymes days apart Most of us caught before we can expand our thoughts How your grandmother see your corpse? How your big homie make your life a book? Left you for dead cause he ain’t need you, right But I’m gon’ fade him, right Let’s put the rags down and raise our kids LetÔÇÖs put the guns down and blaze a spliff LetÔÇÖs do it now, ainÔÇÖt no buts or ifs It took a Blood to get me Pringle chips You can learn to fly or take the ladder Real n*gga shit, all lives matter, both sides” — ScHoolboy Q on “Black THougHts”

A rare success story of a single parent household, according to ÔÇ£Black THougHtsÔÇØ producer Willie B., Q’s mission on Blank Face LP is to show his peers the value of walking away from the gang life and to preach the importance of being an active father in a child’s life by reflecting on his own experience growing up without his dad.

ItÔÇÖs no more apparent than in the last minutes of the promotional mini movie’s third part that illustrates a chilling metaphor of walking his daughter to the bus stop but instead of a school bus, thereÔÇÖs a truck hauling inmates to prison and ScHoolboy, donning a blue jumpsuit, is on board actually inside looking out at Joy, who stands forsaken and alone.

The Hoover rapper also uses his latest album as a platform to speak on the police brutality issue as well. On the ÔÇ£THat Part (Black Hippy Remix)ÔÇØ he questions why the people filming the incident didnÔÇÖt attempt to assist or help diffuse the Alton Sterling situation, instead focusing their energy on getting the perfect camera angle for more views.

ÔÇ£Gangbangin’ like we stand for somethin’ When Alton Sterling gettin’ killed for nothin’ Two cowards in the car, they’re just there to film Sayin’ #BlackLivesMatter should’ve died with him Wrong n**** in your hood, you gon’ ride on him White n**** with a badge, you gon’ let that slide? Tell me how they sent that footage off and slept that night I feel bad that my daughter gotta live this life I’ll die for my daughter, gotta fight this fightÔÇØ — ScHoolboy Q on ÔÇ£THat Part (Black Hippy Remix)ÔÇØ

YG also grabs the topic by the horns and on ÔÇ£Police Get Away wit MurderÔÇØ he shares his belief that many people who carry guns do so to protect themselves from those who are sworn to protect and serve and the subsequent Catch-22 of getting locked up for being in possession of that weapon.

ÔÇ£They say he oversized and choked him out that was harmless to them TheyÔÇÖll hit us and try to blame it like I ainÔÇÖt owe this to them But fuck it, IÔÇÖm waking my people making it harder for them See, the illuminati hide shit they donÔÇÖt tell us Well itÔÇÖs the nigga money cuz my niggas IÔÇÖm gon tell them The truth motherf**ker, hear the truth motherf**ker IÔÇÖve really got a story, this ainÔÇÖt a spoof motherf**ker WeÔÇÖll put our hands up and theyÔÇÖll still shoot motherf**ker And post on trial for one to two motherf**ker They give us years for guns and we can buy em off the shelf But youÔÇÖll get life in the coffin if you donÔÇÖt protect yourselfÔÇØ – YG on ÔÇ£Police Get Away Wit MurderÔÇØ

Hip-Hop has historically been a medium for the urban youth to respond to police brutality, but it’s worth noting that these two albums were created several months prior to the back to back tragedies that occurred earlier this month. With the exception of ÔÇ£THat Part (Black Hippy Remix)ÔÇØ these songs were likely YG and ScHoolboy Q’s reactions to the Mike Brown/Eric Garner wave of deaths, but they fit today’s situation to the tee.

ItÔÇÖs evident nothing has been learned and despite a nation of effort to force a change, zero progress has been made since last time. And while tensions continue to rise with every such incident — look no further than recent retaliatory police killings — the levels of widespread numbness also rise a little bit. In the coming months, thereÔÇÖs a very good chance that the urban youth-police relations simply tread water, or even take steps backwards, so that the next time this kind of an incident occurs, these songs will continue to perfectly encapsulate the situation.

And what’s more terrifying than that?