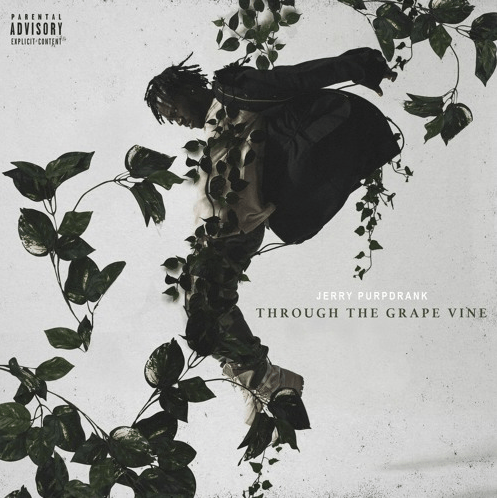 Jerry Purpdrank has really made underground/indie Hip Hop history on the real! His debut mixtape “Through The Grape Vine” has to be, by far, one of the most reliable and potent mixtapes for 2016!  From beginning to end, this very effective 8 track mixtape proves to everyone that he is the true future of Hip Hop.  His ORIGINALITY and CREATIVENESS is overwhelming, especially for being his debut!  Really!!??  His debut!!??  Yep, I said it, this is actually his first ever complete project, shitting on his competition and blowing all these fake ass clown rappers out the water.  This mixtape is full of quality substance, knowledge and really sells all of us on his character and gimmick!

Don’t let Jerry Purpdrank fool you though,  he is a true grinder!!  He works extremely hard on the daily, always keeping up with his huge following on social media which he built from scratch, especially on VINE.  It’s not easy to build a solid foundation online as a all-around entertainer, trust me, I already know, it’s hard as fu*k!!  It’s all about staying committed, never giving up, catering to your fans, staying humble and as I always say, “it’s not a sprint but a marathon”.  So jumping into the music scene was like “icing on the cake” for Jerry Purpdrank, he precisely stayed on the low in this music scene, working on his Hip Hop little by little to eventually feeling comfortable enough to release “Through The Grape Vine“.

The one song that really stood out to me was “On Repeat“.  This song right here defines it all!  Jerry Purpdrank goes in regarding his perspective on how shit is not just handed to you.  I can 100% relate to this track right here!  As he says in his hook “Everybody Want To Eat, Want To Make It Off The Streets, Sleep On Expensive Ass Sheets, Nigga I Don’t Even Sleep“… This hook is extremely potent and gives all these fake fu*ks a true reality check on how it’s done as an indie Hip Hop artist.  Honestly every single song on this mixtape hit me hard!  Really hard!  Much respect to his solid production team he has, the beats on this mixtape fits perfectly with his style and sound.

What gave me the utmost respect for Jerry Purpdrank was when I heard the classic Pharcyde sample on track 1 TTGV that starts off his mixtape, paying tribute to one of the most influential Hip Hop groups of all times.  Just goes to show he is a true Hip Hop head!  Also I really enjoyed his track titled “Living It”, it’s a solid ending track for his mixtape.  As I mentioned before about his production, INSANE beats from front to back with the support from Slade Da Monsta, Diego Farias, Chevali,  Tgrc On the Beat, DP Beatz & Dee B.  Having extremely talented producers will make your music really stand out!

I really can’t express myself more!  Honestly, this is the best mixtape I have come across for 2016. It’s dam near album quality Hip Hop.  If this is the material Jerry Purpdrank drops in a mixtape, I can only imagine how his debut full-length album will offer.  He makes this Hip Hop shit sound effortless, he stays in his lane and if he just continues to stay in his lane he will really influence the world.  As he says in track 1 TTGV “I Want To Be The Best Entertainer Of All Time“, and honestly, that is exactly what he will be!  Please make sure to support and listen to this mixtape.  Visit his soundcloud page and follow/like all his social media outlets.  Support the future of real Hip Hop!

My mixtape Through The Grape Vine is out! Thank you for all the support! https://t.co/6II3SqM3ZE pic.twitter.com/9hZt7EcNvl