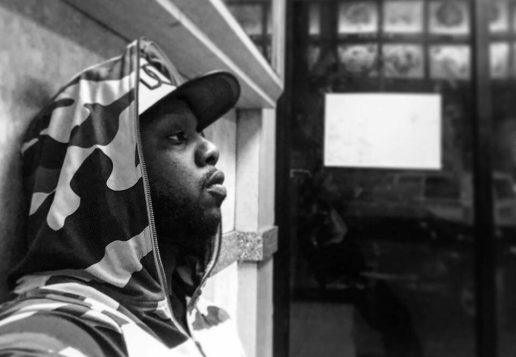 East Shadow!! Much respect for reppin the Brookyln area and bringing back that real Hip Hop! Please tell us how long have you been rapping?

First I’d like to thank you and your staff for giving me the opportunity and platform to appear on your website.

I’ve been rapping for 10 years off and on, but for the last 2 years I’ve decided to take my career seriously and give it my all and make history. Since then I’ve dropped 3 mixtapes entitled “Goons of Thrones”, “Wolf of All Streets”, and “Shadow Walk” ; with 3 albums entitled “Midnight Jungle” and “Midnight Jungle Pt. 2: Concrete Anbrush”, and even completed a script for a short film, “Innocent Murder”.

How did you get your stage name?

I got my stage name because I love my neighborhood East New York. I’ve been here all my life so I wanted to represent it everywhere I go. The Shadow part of my name comes from watching my son play Sonic The Hedgehog. His favorite character in the game happens to be Shadow. I put the two together and it had a ring to it, so I just ran with what felt real to me and right then and there East Shadow was created.

Also how has the Brooklyn influenced your Hip Hop career?

Brooklyn influenced my entire thinking process. I walk, talk, live, and look like Brooklyn. I’ve been heavily influenced by artist like The Notorious B.I.G, Jay-Z, Brand Nubian, Smiff n Wesson, MOP, Busta Rhymes, Big Daddy Kane and so much more. As young boy I idolized these guys. I watched how they moved a crowd and I said to myself one day I’m going to do the same or even better. They gave me the vision and I’m forever thankful especially to have been raised in the golden era of hip hop.

Lets be real, some of the most legendary Hip Hop MC’s out of or BK!

Is there anyone you feel other than yourself who is getting a lot of attention in the Hip Hop game?

Right now I see artist like Designer, Young Ma, Phresher Aboggie, Chance the Rapper, Lil Uzi Vert, and Lil Yachty are artist in the hip hop game doing their thing. I got love for all the new talent that’s out but my heart lies more with that old school underground/ indie vibe.

Do you collab with other BK Hip Hop MC’s.

I have some future projects lined up where I’ll be teaming up with Caspa Narkz, Loyal and Maj again. I’ll also be teaming up with indie artist like Micheal Moon, Mar-q, and indie soul singer Matteis, and many more. In the future I would like to do collabs with commercial artists as well. But for now I personally want to eat with the people I’m coming up with then I can gradually branch off.

The album “East Mode” stems from the saying Beast Mode. Future titled one of his mixtapes “Beast Mode”, so I put my own lil spin on it and called it “East Mode”. I was a beast however and wrote at least 30 tracks for this project and eventually only 9 made the cut. Not that the others tracks weren’t good, but overtime I’ve learned there is a strategy to selecting what you want to give to the people.

Who did the production?

I wanted this album to have that real hip hop feeling. So I reached out to several producers who helped me capture that sound such as 2Deep Beats, Majestic Drama, Black Light Music Productions, Kajmir Beatz, Komo Beatz and Beatbusta. I recorded in my boy Jimmy Swagg at his studio in Maspeth, Queens. Then I worked with Atlantic Records mix engineer Mikaelin “Blue” Bluespruce, who took my album to another level. I then put the final touches and mastered the album down with Sweet Sound Mastering.

How long did it take you top complete the entire album?

The whole process took about 6 months to complete. I was back and forth between two different studios. There were a few sleepless nights with trying to perfect each process from recording to mixing and master.

Also tell us a bit about the dope album cover?

The album cover represents how this country can bring the animal out of you with the racial and financial inequalities, drugs and crime infested neighborhoods, mass incarceration, and politics. So I reached out to a guy who had previously contacted me on Instagram named Breaksome (@Breaksomefx) for the artwork. I gave him the idea and three hours later that cover came to life and it captured everything I wanted for the cover.

Who are your top 5 MC’s and producers?

This question is always difficult for me because it always hard to just select 5 rappers. But if I had to choose it would be The Notorious B.I.G, Tupac, Jay-Z, Nas, and DMX.

And how have they contributed to your Hip Hop sound?

I have taken notes and studied the craft of these MC’s and producers; finding what resonate with me and I’ve been building on that. They have created sounds that will last through the test of times.

Also, how do feel about actually being one of the few MC’s out of BK that is really pushing quality Hip Hop instead of the Crap Trap bullsh*t everyone is one?

To be honest I feel great but I’m also highly disappointed how the radio plays only 4 different artist who are not from New York all day long when there’s 5 boroughs of talent. I’ve come across some serious talent here in Brooklyn, but outlets to reach the people are limited and we have to change that faster than ASAP. This whole mumble trap music sound that’s going on I don’t knock it because music can do anything it wants that’s the beauty of it. I may not agree with all that’s being said but it’s a trend and soon somebody is going to come and put a new spin on hip hop and change the game as we know it for the better or worse. I try not to criticize the youth but more so guide them. We are all young once.

How many music videos do you have?

So far I have 3 music videos “A Piece of Died” and “Fake Friends” from my second album “Midnight Jungle Part 2 :Concrete Ambush” and first single from “East Mode”, “Look At Me Now”.

Any videos in the works? I recently shot a video to my latest single “Hood Politics” off that “East Mode” album. It is set to premiere in mid October 2016.

Early next year I plan to start filming for my script I wrote called “Innocent Murder”.

How often do you perform LIVE?

Any shows lined up in the near future?

Any plans of maybe rocking a LA show?

Of course! My manager, Kat Roe of the Da Formula Entertainment and I had several discussions about heading to LA for the new year for a change of environment, to network, perform and touch the people of the west coast.

What motivates you to continue your grind and hustle in this Hip Hop game?

What motivates me is my passion for music in all genres. I know I have the talent to accomplish goals and top charts. But that’s the least of it, I really and truly appreciate the fun in making music, and the power that words have. This alone keeps me hungry and not thirsty.

Underground hip hop means the 4 structures of which hip hop was based on; breakdancing, MC’s, graffiti, and DJs. Every boom bap sound stems from these elements. A true hip hop fan can tell you about a vinyls, cassette tapes, cds, and now the digital era. The underground scene is about talent while the commercial scene is about appearance. The love is more authentic in the underground world.

I’d like to shout out my cuz Caspa Narkz who connected me to certain people who helped take my projects to a whole new level. Shout out to my other cuz DJ Puncheon for spinning my tracks every Thursday on Illustr3us Music Group’s Ill Radio, and for believing and supporting me no matter what. Shout out to my boy indie artist Micheal Moon and host of Illustr3us Music Group’s Ill Radio for giving me platforms to perform and for giving me my first on air radio interview. Shout out to my boy Loyal and Nic Pinto for all your advisement and support. Shout out to some of the OG’s who still guide me to this very day. Shout to Da Formula Entertainment. Shout out to everyone who takes the time to listen share and repost my music. To the ones closest to me, shout out to my manager and lady Kat Roe who has been holding me down from the very start. She is my number supporter, fan and my ride or die. Words can’t describe how thankful I am to have her in my life. We are that power couple. Last but not least to my son who gives me the motivation to face my fears and fight to provide a better life for him.

It’s been real I appreciate the love and support from Underground Hip Hop and until next time peace and love it’s ya boy East Shadow “Long Live the East”.