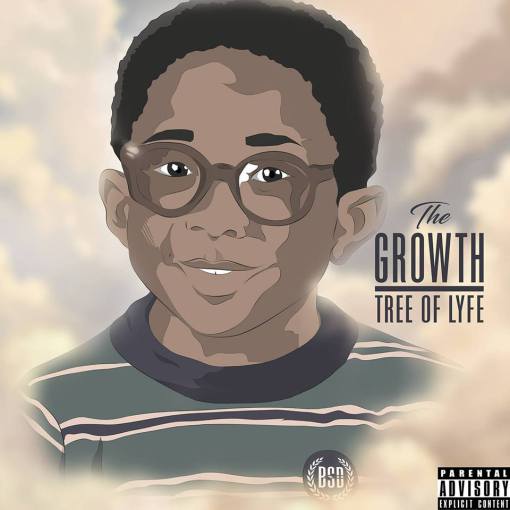 Tree of Lyfe! We are absolutley stunned to find out you are based of LA! UndergroundHipHopBLOG.com is based out of LA as well! We really enjoyed your debut mixtape “The Growth”, at least your one of the few out here that are acually DOPE!….LOL What exact city are you from, how long have you been rapping, and how did you end up getting your name Tree of Lyfe?

Haha Thanks I’m glad you enjoyed the project. I’m originally from Detroit and grew up in Inkster, which is right outside the city. I’ve been rapping since my first year in college, my boy was freestyling while he drove and told me to spit with him, and that was it. It came natural to me, after that you couldn’t shut me up lol.

I initially came up with the name for a group me and another artist wanted to do. I got the name from the biblical story where Adam and Eve lost their eternal life by eating from the Tree of Knowledge of Good and Bad. The Story says Yahweh placed 2 Angels in front of another Tree, the fruit of which could have given them their eternal life back. That tree was described as the Tree of Life. That was my main inspiration for the name, eternal life because who doesn’t want to live forever? It also has a lot to do with showing respect and love to your roots, your family history and how we reflect different branches of our family tree in general.

We’re all given a name and they all carry meaning so I wanted to choose something I identified with fully, instead of just a slave name.

As we are both aware, it seems like EVERYONE RAPS NOW!!!..LOL especially in LA..LOL. That being said, what makes you stand out compared to these other of hundreds of so-called rappers out here. What makes you different, and how important is LA for you?

I think putting a new genre on the map instead of following trends and current waves is something I’m doing that others aren’t. We seen that time period when Rock & Roll faded and Hip-Hop emerged and I’m not saying that Hip-Hop is fading but I think it’s time for the next level of music to emerge from the creativity of this generation. I want to bring the Soul back to the music, that feeling I got when I heard the Miseducation, and the College Dropout, our voice was strong. I feel like so many people just say whatever is popular and may be afraid to step out and say something real.

The Brilliance Experience is something that transcends music to where you can be entertained by the Anime style of art, or gravitate to the limited edition fashion, while the music provides the soundtrack to it all. People love exclusive products, The Growth gives glimpses of it but the hip-hop vibe still kind of dominates it more or less. Incorporating a story into my music than interpreting it in the digital art world via my own hands isn’t something I see a lot of people doing, I’m very hands on with everything I got going so sometimes it takes me longer but it’s always quality.

LA is extremely important to me because I moved here at 18 solo, I became a man here. I learned how hard life can be and proved to myself I could do whatever I put my mind to, without a safety net. I was homeless for a while, I went through a lot on my own so LA is everything to me, my struggle, my pain, my test, my triumph.

Please breakdown the creative process of your debut mixtape “The Growth”. Also tell us a bit about the dope mixtape cover? Is that you on the cover?

I was working on my upcoming EP, “The Other Side of Paradise” but I felt like there were too many missing pieces to my story to just transition to Tree of Lyfe and drop TOSOP for anyone who knew me as Bruce Stevens. The last 2 mixtapes I dropped “The Progression” and “The Progression II” under had a completely different mentality, vibe and overall tone so anybody who knew me from that might be confused by the drastic change of content. I mentioned it to my manager one evening while I played a bunch of records I did after “The Progression II”. A lot of the songs weren’t finished or just concepts, so I decided to finish some, write some new material and drop a mixtape to bridge the gap and reintroduce myself. There were a lot of growing pains that influenced TOSOP so it made sense to get my feet wet with “The Growth” first.

I’m glad you like the cover, I drew that image from an old school pic my mom held on to. She called me her professor because I was like a mini adult haha a real old soul so I thought it would make sense to go back to that moment in time to represent my growth spiritually and mentally regardless of the physical, to me it’s all about your mental.

As you stated that this mixtape is your debut? So you never ever dropped anything before, right? Did this debut mixtape meet you expectations when the complete project was put together and ready to be dropped?

It was my debut as Tree of Lyfe since I dropped those other projects in the past. Those were more of just a fun thing though, I wasn’t really taking it serious like I am now. I don’t think my expectations will ever be met lol nah but I put my heart and soul into this project and people donated a nice amount of money, which they didn’t have to do so I know the people who I was able to get the project to enjoyed it and that means everything to me. When I listen to it I see pictures of different times in my life and the past helps create my future. It’s so personal to me that I love listening to it like how we look back at childhood pictures.

The candidate off of The Progression 2 and I just dropped one for this project so far, Pray 4 Cry 4 You which was shot in Cancun. I’m currently editing Concrete Eyes, Exist, and scheduling shoots for Talks w eLO, Thinkin Bout You and Kingdom.. I’m gonna try to do as many visuals as I can. Hymm is a special record to me so I want to do a video for that as well. I just dropped a video of another unreleased record I had in the stash recently as well called The Spell.

How often do you perform LIVE. Any shows lined up in the near future? Any LA shows?

I try to stay active between the brilliance line, art shows and my day job I perform a few times a month. We recently did The Last Bookstore for dtla artwork and was told we were the first hip hop act that was allowed to perform there. I’m not sure if it’s because of the Soul Hop 4 the Hip Soul genre we push, but that show was a blessing. I have a show coming up October 14th at the Dragonfly and I’m working out some dates in The Bay to do first Fridays and Trapxart.

Where do guys see yourself in 5yrs time?

I see myself having music in a lot of films and tv and working on my anime series. All the art I do is building up to a series so everything is tied together so in 5 years I see myself making waves in the anime world getting more into scores & giving back to the youth with the brilliance foundation, teaching, taking care of the community.

Shout out to all the people who are currently making Brilliance a special movement, Mohini Prasad, Eva Sparks, eLO, Biz, Andre Paxton, Hannah Ureste, I hope to grow and build a foundation with you all. Create always, live forever. One Love. Thank you for the opportunity to gain more exposure. It is greatly appreciated. So in closing shout out to you.