JID’s ‘Forever Story’ Rollout is a Blueprint for Independent Artists JID’s Forever Story, the Dreamville rapper’s highly anticipated third studio album, finally dropped last night.  We will have an in-depth album review for you next week sometime yes, but today we want to focus on deployment, the ins and outs of how JID’s promo for the album was innovative, thoughtful and patient.

Above all, the Forever Story rollout is a story of patience.  The drop comes nearly four years after JID’s 2018 Dicaprio 2.  In an interview with Complex, JID explained, ““[I’ve been working on this album] for two years. DiCaprio 2 dropped in November [2018], then in January we go and record Revenge of the Dreamers 3. February, I go straight on tour and I was touring up until January 2020. Then the world shut down,” JID says. “I rented a house in Atlanta to work on my album, but then the world shut down so I said, ‘Fuck it, let’s just do Spilligion [album from Atlanta collective Spillage Village] here.’ So I literally started [The Forever Story] in 2020 because in 2019 I was running.”

JID truly took his time writing, recording and presenting Forever Story, but in the four year window he was anything but stagnant.  Outside of the collaborative albums with Dreamville and Spillage village he’s been on a tear of features and sync projects, including tracks appearing on Madden, Arcane League of Legends and more.

Constantly engaging his fan base throughout the creative period of the album allowed JID to drop Forever Story with tons of momentum.  To a growing fanbase, starving for new music.

This is an easy path to follow – in the process of making an album, make sure you are engaging fans with new music, and relevant content so they stay connected.

Surround Sound (feat. 21 Savage & Baby Tate) dropped January 14th 2022.  It is the lead single for Forever Story and certainly one of the tracks from the album with the most mass appeal.  Single selection can be challenging, but this was a smart choice, with a song that is a certified banger, a stunning music video, and a feature with the reach of 21 Savage.

Surround Sound simultaneously captivated JID’s core fans, while unlocking new ones through 21’s niche.  The same can be said for the League of Legend’s track Enemy which tapped into a whole new demographic of listeners through Imagine Dragon’s fanbase.  Even for a burgeoning star like JID, it’s vital that artists constantly find new avenues to reach different fanbases, and doing so before an album drop can be the difference between success and failure.

Furthermore, dropping Surround Sound early gave fans ample time to digest the track, while wondering what would accompany it.  Mystery is a clever marketing tool, and when used intentionally adds to the hype of upcoming drops.

Be intentional about the single you choose to release.  Select a song with great reach, and that clearly represents you as an artist.  Make sure it is accompanied by some visual content, and release well ahead of time. 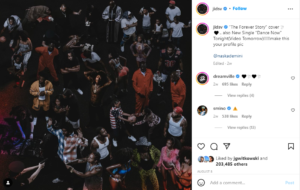 JID dropped the second single Dance Now for Forever Story about two weeks before the album, and used it as an opportunity to reveal the album artwork.  The album art is a clever recreation of The Never Story cover.  Once again, the timing is perfect.  JID gave fans a week to digest the cover, celebrated the artistic work of photographer Naskademini, and used the opportunity to share another electric single from the album.

The lesson here is simple: every announcement made should be executed with intention, and highlight different aspects of artistry all at once.  In this case, JID combines the visually aesthetic prowess of the album with a new track, amplifying fan response.  You can do the same by highlighting your album cover artist, and celebrating their work with a mixed media presentation.

A week before release, JID dropped a third single that was intended for the album 2007.  A beautiful track, ripe with storytelling and culture, 2007 was unable to make the cut as the album outro due to sample issues.

Rather than complain about it, JID dropped the track to youtube as a freebie.  This is the music industry, and unfortunately shit happens that is out of your control.  Figure out creative ways to use the tracks that you are unable to feature on your albums.  They are built in promo, and JID did just that with 2007. 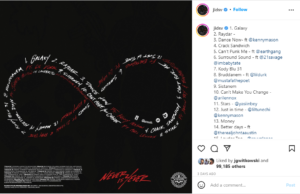 Additionally, JID organized a scavenger hunt, in which fans were to find hidden 2006 Gold Pontiac G6s in his hometown Atlanta, New York, and LA.  Fans who were able to find the cars had a chance to listen to the album early.  The presence of the vehicle traces back to JID’s relationship with the sedan which he raps about in detail on The Never Story.  Cops in NYC shut down the hubbub, only adding to the social media dramatization of the event.

Now obviously, as an independent artist you are unlikely to have the budget for such an immersive publicity stunt.  And you are also unlikely to land features of this caliber.  That said, it is easy to come up with creative ways to engage your city pre-release.  Put up fliers, put on a free show, have a listening party – get creative and hit the streets.  Include features one your album who open up new avenues to fans you might not regularly be engaging alone.  Be tactical with the artists you include on your project.  These factors can have a huge effect on the success of your project.

On top of releasing an incredible piece of art, JID provided a thoughtful layout for album release that can be used by artists across genres, at all stages of their career.  Being mindful about release strategy is a vital step to the success of any project, and planning ahead is a key factor to a fruitful release.