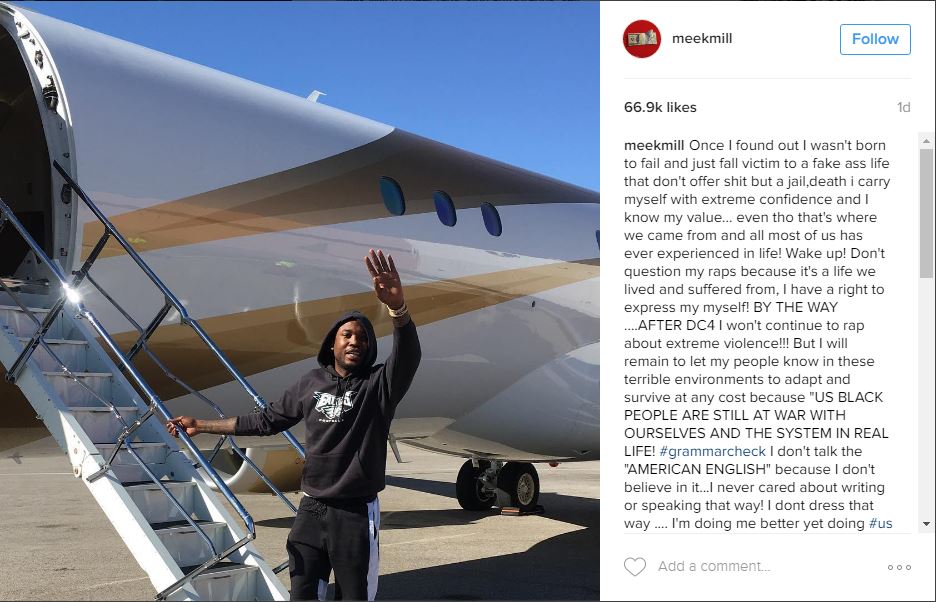 Meek Mill recently made news as he dropped his new branded sneakers as well as made an announcement regarding the type of music he’ll be making after his DC4 album.

Fashion and music have become more and more intertwined as more artists develop their own sneaker and fashion lines. Meek joined this growing list on Friday [July 15] when he visited Roosevelt Mall in Philadelphia to celebrate the collaboration of his new exclusive sneakers from his PUMA Dreamchaser Collection, featuring┬á PUMA Blaze of Glory and PUMA Basket. These sneakers will only be available to those at the Philadelphia PUMA Lab until they go global on July 22.

In regards to his future music, Meek decided he would no longer rap about extreme violence and addresses his views on violence. On his personal Instagram the following,

ÔÇ£Once I found out I wasn’t born to fail and just fall victim to a fake ass life that don’t offer shit but a jail,death i carry myself with extreme confidence and I know my value… even tho that’s where we came from and all most of us has ever experienced in life! Wake up! Don’t question my raps because it’s a life we lived and suffered from, I have a right to express my myself! BY THE WAY ….AFTER DC4 I won’t continue to rap about extreme violence!!! But I will remain to let my people know in these terrible environments to adapt and survive at any cost because “US BLACK PEOPLE ARE STILL AT WAR WITH OURSELVES AND THE SYSTEM IN REAL LIFE! #grammarcheck I don’t talk the “AMERICAN ENGLISH” because I don’t believe in it…I never cared about writing or speaking that way! I dont dress that way …. I’m doing me better yet doing #usÔÇØ.

He is one of the first rappers since all of the recent gun violence rocking the nation to address being a catalyst for change using his personal music.