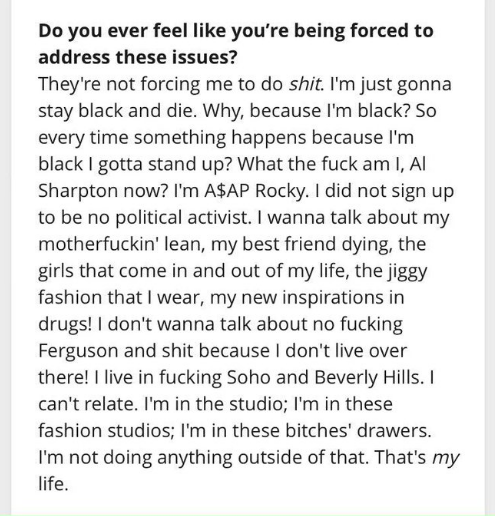 Yesterday, social media was abuzz with excerpts of a 2015 TimeOut interview with A$AP Rocky, in which the rapper discussed Ferguson, and rappers’ responsibilities in the realm of social activism. Specifically, when Rocky was asked about whether or not he feels forced to address issues of social injustice, he responded with somewhat of a crass set of comments that rubbed most of Black Twitter the wrong way yesterday, especially in light of the recent police killings of Alton Sterling and Philando Castile.

Last night, Rocky took to his Twitter and unleashed a since-deleted Twitter rant on the matter, reiterating his stance that he’s “no politician,” and denouncing the issues of police brutality plaguing the Black community.

A$AP Rocky Responds to Controversy Surrounding His Interview About Ferguson and #BlackLivesMatter : The Source