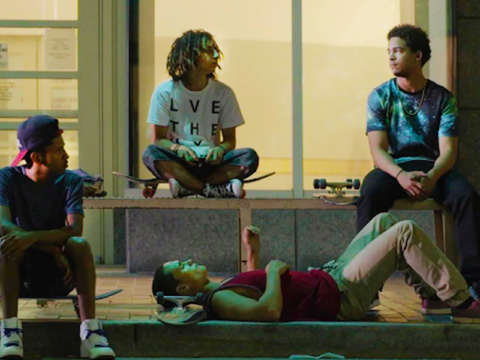 With anticipation continuing to grow for hip-hop executive Nas‘ upcoming The Land movie coming, take a look at its full-length trailer.

Executive producer Nas presents this vivid inner-city saga set amidst ClevelandÔÇÖs hip-hop underground. Teenage buddies Cisco (Jorge Lendeborg Jr.), Junior (Moises Arias), Boobie (Ezri Walker), and Patty Cake (Rafi Gavron) shrug off school to practice skateboarding, which they hope will be their ticket to a better life. In the meantime, they steal cars to finance their dream. But when they get mixed up in a drug deal and cross a ruthless crime queen-pin (Linda Emond), they put their friendshipÔÇöand livesÔÇöon the line. Set to a choice hip-hop soundtrack and featuring an impressive ensemble cast that includes The WireÔÇÖs Michael K. Williams, Erykah Badu, and rapper Machine Gun Kelly, The Land crackles with the energy and poetry of the streets.