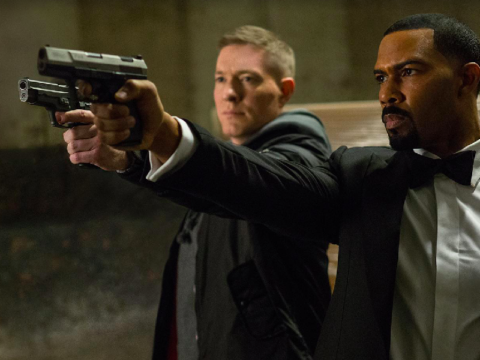 To appreciate the brilliance of Power’s Season Finale, you need to see EVERY episode. [1 – 9] This is not the episode to start watching Power. This episode takes us into season 4 which has already begun filming.

In this episode, Greg figures out that Mike is the mole and Angela screws Jamie one last time.

The Feds find the dead body of Ruiz. Greg searches the body and finds the wire that Ruiz was wearing when he met with Milan. Jamie, parked not too far from the scene, calls Angela to see if she knows anything. Angela is clueless.

Milan overhears that Jamie is about to close the deal with the Bassetts. While meeting with Tommy, Milan disrespects Petar which Tommy makes note of. Milan explains Jamie will be killed after he signs the paperwork with The Bassetts. Tommy is expected to deliver the final shot to Jamie.

Jamie breaks into Greg’s apartment to see what evidence Greg could have against him. While searching the apartment, Jamie finds Angela’s undergarments on the bed which angers him. As Jamie leaves the apartment, he get distracted, leaving behind evidence.

Prior to his death, Lobos warned Tommy and Ghost they were getting sloppy.

Greg meets up with his mentor and they review the audio Ruiz recorded. The audio indicates that Tommy and Ghost killed Lobos, however the audio will not stand in court. Greg pulls over Jamie in a routine traffic stop and attempts to get him to roll over on Angela. Jamie refuses to participate. Afterwards, Greg calls Mike to discuss the Lobos murder at his apartment. Greg tells Mike that he is confident that Angela is the leak until he gets a phone call from the Mexican Federal Police. Greg takes the call in private and suddenly has second doubts about Angela being the leak. Greg starts to realize that Mike is the mole. Mike comes clean and tries to persuade Greg to frame Angela to regain his reputation. Greg declines. Mike kills Greg and plants his phone in Greg’s apartment.

Let’s keep it one hundred. Greg was stupid for trying to convince Mike to turn himself. What was he thinking? . Jamie tells Tasha that Tommy is changing and he’s concerned. During his speech, he slips about “he helped him with Holly” which raises a red flag.

Tommy meets up with Petar and questions his allegenace to Milan. Tommy questions if Petar can be trusted and be part of his plan.

MJ from Internal Affairs meets with the Feds and names Greg Knox as the mole for Lobos. No one believes it, including Double Agent Mike. The IA also mentioned that there was “no signs of forced entry, unless he left the window open.” Angela mentions that Greg never left his windows open.

Tasha tells Tommy that Jamie can never know she told him about Ruiz. Tommy tells Tasha he has a plan to get out from under Milan. Finally Tasha wants to know more about Holly’s whereabouts, which Tommy dismisses and tells her to “stick to the plan.”

Tommy tells Tasha “it’s handled!” Who does he think he is? Olivia Pope. LOL

Angela questions Jamie about his whereabouts when Greg was killed [but she doesn’t say Greg was killed]. Jamie tells Angela that Greg pulled him over and that he would do ‘anything’ to protect her. Angela tells Jamie now that the Lobos case is closed, she no longer wants anything to do with him.

Kanan Slim gives Tariq a package to deliever to his boy Ray-Ray. Tariq delievers the package to Ray Ray. The package is a bag of guns and Ray Ray is an undercover cop who arrests Tariq. Ray Ray places Tariq in the squad car where Officer Jukebox is waiting. Jukebox plays the role of a police officer, tries to get Tariq to roll on who gave him the package. When Tariq refuses to snitch, the squad car pulls off. Suddenly, Kanan hops in the squad car and reveals this was a test to see if Tariq was a ‘G.’

Kanan calling Tariq a G is a double-entradre. ‘G’ as in gangster or Ghost.

Angela returns to Greg’s apartment and finds a fingerprints on the window that Greg never leaves open.

Jukebox, Ray Ray and Kanan return to the apartment with Tariq. Jukebox questions how rich Jamie is. Jukebox convinces Kanan that he is thinking small-time and should kidnap and ransom Tariq. “You get Ghost’s money and kill his kid. Flawless victory.”

Jukebox makes a reference to Disney’s The Lion King. In real life, Jukebox is the voice of Tiana from The Princess and The Frog, another Disney movie.

Jamie throws a party at Truth to impress The Bassettes and to earn their business. Dre sneaks his boys into the club and warns them not to deviate from the plan. Milan sees Jamie sign the contract with The Bassettes which means it’s time to kill Jamie. Jamie puts a gun in Milan’s side and instructs him to look around the club. Each one of his men has been taken down by Dre’s boys. Milan motions to Tatiana to help him, until Tasha puts a gun in her side as well. Milan is led downstairs and met by Tommy. Milan is driven to his warehouse and killed by Tommy and Ghost – together.

Jamie goes back to the club while Tommy confers with his new partner, Perta. Tommy’s plan is to continue selling drugs in Jamie’s clubs despite what Jamie thinks.

Tasha comes home and Tariq isn’t there. Raina (Tariq’s sister) indicates that Tariq is hanging out with his new friend Slim, who is a friend from their old neighborhood. This alerts Tasha who calls Tariq. Moments later, Tasha receives a picture of a passed out Tariq being held by a burnt arm and a message that reads, “If you want him back, you’re gonna have to pay.”

The Truth party is going great until Angela arrests Jamie in the club for the murder of Special Ageny Gregory Knox.

Wow. What an episode. What did you think? Was it everything you expected? What do you think is going to happen in Season 4 of Power? Will Michael Rainy Jr. (Tariq) outgrow Omari Hardwick (Jamie)?