On The Rise: MadeGroceries Shares Their ‘WahnTown’ Story With the World 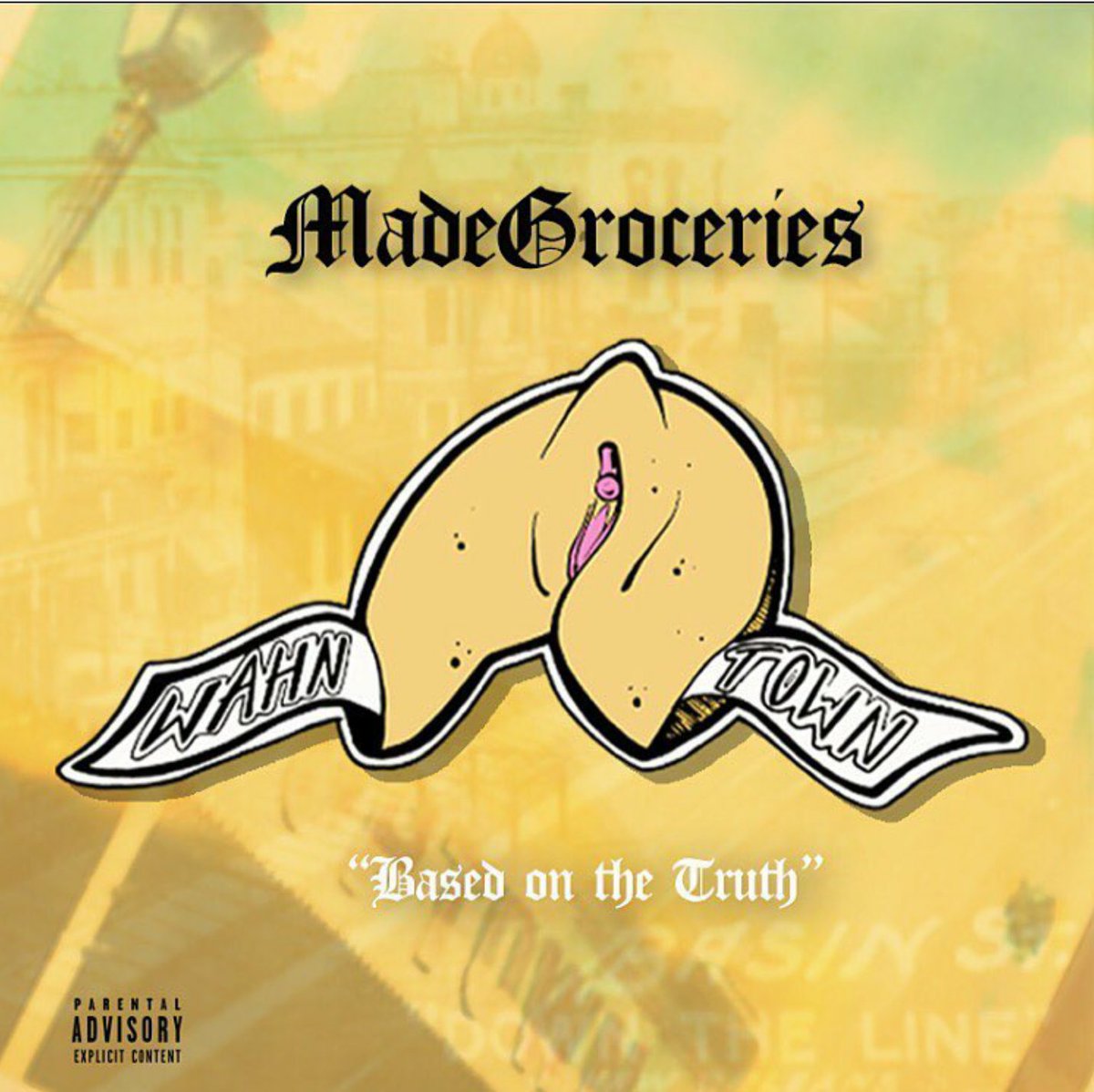 Born in 1993, the three members of MadeGroceries: Mauley Sincere, The Landlord, and Oeaux Neal join forces as New Orleans’ most formidable rap group. The GroceryBoys can be described as  lyrical picture painters, well Oeaux Neal is an actual painter, but that’s another story. Their latest piece of art, ‘WahnTown’, is a depiction of New Orleans’ historic, Storyville neighborhood.

Storyville, now renamed WahnTown by the GroceryBoys, was a place of mischief, and despair for all those unwelcome to the city. After researching and learning more about the situation, the boys decided to make their own rendition of Storyville, in the form of an EP, and the end result was WahnTown. The boys take their audience on a trip like never before, teaching them love, courage, and how to overcome fear. The world will have to brace itself for the energy that MadeGroceries will put into the world. As we can see, society is in a very awkward place stemming from its own government and natural disasters. MadeGroceries is here to supply comfort, healing, and growth for all. As they would say, “it’s much deeper than this music ish” and they are more than ready to back it up.

Let’s talk about Oeaux Neal. The evolution of Oeaux Neal as a person, has been parallel to his evolution as an artist. Now doubling as a visual artist, and MadeGroceries’ melodic, harmonic, conscious, floating in the universe 1/3, Oeaux Neal has reinvented himself continuously.

If you’ve been yearning for an artist that combines so many different elements, who just when you’re thinking he’s gone full conscious, doubles back with a sexually driven bar, Oeaux Neal is your guy. If you’re not really listening, and paying attention you won’t catch all of the facets to Oeaux Neal, he’s complex, like The Landlord and Mauley, but he’s as complex of a person as he is as an artist. His melodies on WahnTown shows his intention to convey artistic expression, and the expression is strong throughout.

Oeaux Neal is at his best on…

Oeaux Neal went the craziest on “Say Love”. “Oh, would I love to love ya’ baby..”. Singing “I’m so gone..”, and handling hook duties, Oeaux Neal sets the tone for “Say Love”, lays the foundation for the concept of WahnTown, and never looked back from there. It’s easy to get lost in the lyrics of “Say Love”, and it’s primarily because Oeaux Neal paints such a vivid picture from go.

We spoke briefly with Owner of Small World, who houses MadeGroceries, Ebonie Mathews, and she answered a few of our questions regarding the Grocery Boys + WahnTown.

I love WahnTown. Its a different sound from them. Im very proud of how they have developed their music over the years. Being that we are living in a world with so much negativity, Im proud to stand behind my guys as they challenge people to overcome certain fears that hold us back from self growth. That is our sole mission – GROWTH!

What does WahnTown mean to you?

When working with true creators, you have to balance what the industry wants and what we chose to give them. Wahntown is much more than just a great project, its focusing on things as self love, courage and fighting through distractions.

How did you feel about release week?

I was really excited for release week. Im always eager to bless the world with each drop because I see how my artist work to create it. The soft drop (hard copies) has been great feedback so far. The official release is set for Oct. 12th before we head to Revolt.

Where do you see this moment putting Small World as a label + MadeGroceries at, 5 months from now?

In five months from now, I just want to touch more people. We have a lot of art to share and I am just hoping the people are ready to receive it.

For most of 2016, some of New Orleans’ finest musicians, and creators have shared their stories at DaTakeOver podcast, directed by the dynamic duo of Maq & Thedo. Everyone from Chase N’ Cashe, to B Mike have sat down at DaTakeOver, and the audience grows each time. This time featured the largest audience, on the biggest stage, in what was the biggest moment in DaTakeOver Podcast history. A live podcast, with MadeGroceries debuting their cool new EP, WahnTown. The unique thing about DaTakeOver is its dedication to highlighting primarily New Orleans talent. Hosting New Orleans’ best rap group’s live podcast, just made so much sense. Maq & Thedo care about the culture, and as journalists, it’s important for them to do so. How was the night? Special. Brandon “B Wes” Williams, who handles everything for the GroceryBoys from travel to marketing, simply described it as that, special. Following his career for so long, and seeing how far he’s come, and seeing him overcome with emotion before the podcast started was truly fulfilling. New Orleans on the rise. WahnTown is clearly a depiction of that.

Let’s talk about The Landlord. Man, one of the most unique artists in the city of New Orleans, The Landlord raps circles around the competition. Talk about getting lost in a verse, he will truly having you stopping, rewinding, and analyzing a verse for minutes at a time. Every verse of The Landlord’s is like a history lesson, or a lesson in general for that matter. Having an artist as young as he is, in 2016, with the pressure of today’s game weighing heavy at all, it’s a true eye opener to have someone stick to their guns, and keep it super Hip Hop all of the time.

Awakened verse, period. The Landlord batting cleanup is an amazing formula, and as Oeaux Neal, and Mauley hook you, The Landlord comes in and knocks it out of the park. He’s at his best in that role.

The Landlord is at his best on…

SOS! Wow. The Salt & Peppa, “Push It” bar, waves. The Landlord can really rap. Like the actual skill of rapping. Yes of course he’s a lyricist, his bars are piff, and he speaks mad amounts of real. But, when it comes to just the actual skill of rapping, like the talent of it, The Landlord can flat out go. On SOS, he showed this. He showed why he was appointed Lil Wayne duties on a few tracks, it’s like he lighter flicked before he rapped.

When WahnTown becomes available online, please run & get it. The listen is rough, edgy, the sounds are different, sonically it’s like Yeezus, in the sense that Kanye had to take a chance, he had to test different melodies, different rap flows, different song structures, and it went over some people’s heads, but when finally digested, you realize that it was well worth the diligent listen.

You remember 90’s rap, when rappers/rap groups would just completely make up words & characters in songs, and on albums? This is what Mauley Sincere brings to WahnTown. A larger than life figure, who at times really isn’t Mauley Sincere at all. WahnTown is that alternative universe, and Oeaux Neal is there making up sounds, The Landlord is in there teaching hidden lessons, and Mauley is there creating a language, and characters to carry out the new language. Mauley has conversations with God in his raps, the talks are seemingly paying off, because his verses always hit on a spiritual level.

Mauley Sincere is at his best on…

“Wahn”. That song as a whole is, classical. Feels like authentic Hip Hop, super New Orleans in a strange way, but like 2020 New Orleans, ahead of its time, if that makes sense. Maul on that record? Well, Maul gon Maul. He raps, “My main desire is not to desire anything at all.” Often times, we don’t get quick messages like this in our music. That practice, is a practice that can change lives, and it’s spit in an iLL rap song, easy to comprehend, and much needed. This is usually the vibes that Mauley Sincere provides, and they’re all throughout WahnTown.

Brothers, WahnTown is an amazing piece of art. I’m truly proud to have had covered you for this part of your career. To see the creators you’ve evolved into makes me proud to say I began my career covering New Orleans Hip Hop, and stumbled across this young, hungry rap group who had bars for centuries. Your music is timeless, WahnTown is timeless, and needed especially in this time. You give hope to our generation, that if you search for yourself, you’ll find it, and you’ll realize that the person you find is truly powerful. You guys’ words are meaningful, and insightful. Lu, I remember the first time we met, and you told us about the tribes in the Bible. I promise, even though we laughed, we haven’t stopped researching that yet, we have to know if it’s true or not. (Lol) When you were in the NOLA Music Awards cypher last year, my brothers were so impressed with you, that they talked about you, and your verse for what felt like months straight. Neal, you’re an icon. Whenever someone sees you perform for the first time, they always end up raving. You embody a star, but your humility oozes through your aura, and it’s a beautiful thing. What you did on WahnTown is nothing short of amazing, you’re a true artist in every aspect of the word. Last, but not least, Maul, sun you’re a special talent. Our talk at the podcast solidified how I view you as a person, and as an MC. Your desire to be great is inspiring, and when the music cuts, and you spit, “haven’t I given you flame from the start, hoe?”, is truly symbolic of how the world views you. We’re all rooting for you, and we love to see you in your zone.

WahnTown will be available online, via Tidal on October 12th.

On The Rise: MadeGroceries Shares Their ‘WahnTown’ Story With the World : The Source