Serena Williams Looses At US Open And Looses Number 1 Ranking 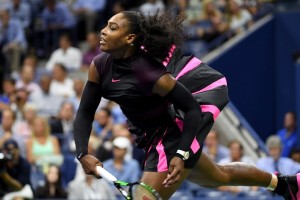 Last night [Thursday, September 8], Serena Williams took on Karolina Pliskova in a semi-final game at the US Open. The pressure was on for Serena, with the record of a 23rd Grand Slam titles and winning a 7th US Open looming over Serena for the whole tournament.

Serena looked off her game all night, and ended the night by double faulting on her serve on match point. Pliskova, a 24-year-old from the Czech Republic, won the match 6-2, 7-6 (5), and advanced to the women’s final. It turns out that Williams was suffering from a bad left knee that slowed her down throughout the night.

After the game, Serena fielded questions on why she made so many mistakes and played sluggishly. She adamantly denied that she was tired from the game the night before, and she said she wasn’t going to make any excuses for the way she played. She said:

“My mind was just a little bit everywhere, but it was what it was…Yeah, serious left knee problems. But fatigue had nothing to do with it. If I was tired, I need to find a new career.”

As a result of this loss, Serena lost her world number 1 ranking, which she had held for 186 consecutive weeks. Pliskova will now play Angelique Kerber, who is the new number 1, in the women’s final. On the men’s side, Novak Djokovic will face-off against Gael Monfils in one semi-final game, and Stan Wawrinka will face Kei Nishikori in the other semi-final match.

Serena Williams Looses At US Open And Looses Number 1 Ranking : The Source