22 Savage Defends Ripping 21 Savage’s Rap Alias: “I Jacked Him Out Of His Name – He’s Gotta Take His Licks” 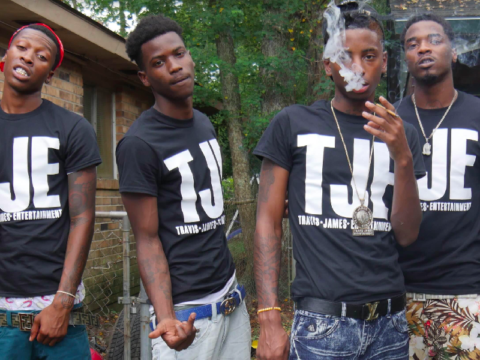 What people don’t understand is that underneath this funny, it’s really real. We’re in the streets. I’m a street n*gga trying to make it out anyway I can.

Comedy was only a way out of here. Rapping was the meal ticket. I’m really in the streets. People know that Mike isn’t to be played with. That’s really what it is behind that funniness.

I jacked 21 Savage’s name. I jacked him out of his name. I just changed the number. I just jacked him. He’s gotta take his licks.

I just felt like jacking him. 22 Savage. I’m really a savage out here. I’m really in the slums. I’m in the trenches.

Shooting the “Jumpin” music video was a scene. We had the h*es come pop that a**. The director David is really just a street, white dude and we just linked up and shot that video.

We really couldn’t bring all the guns out because the police would have shut it down like last time and took me to jail. So we just kept it at a minimum so we could run with them b*tches. Real talk. That’s why we didn’t have too many glocks.

But David had his [glock], he stays clutching and we shot everything in one day, about four hours. We had a few breaks in-between. We had to wait on them slow a** h*es. I was about to say f*ck them for taking so long.

Travis James Entertainment is for life. TJE is the family and for life. Anyone who f*cks with that is going to get their sh*t split. They’ve been with me since I was a baby. That’s the gang.

Transitioning into rap, I’ve been rapping my whole life but I really wasn’t getting attention. I was in and out of juvenile [detention]. I wanted to do something that no one was doing and it was comedy. But then I switched over to rap and that’s what I love and have been doing.

The post 22 Savage Defends Ripping 21 Savage’s Rap Alias: “I Jacked Him Out Of His Name – He’s Gotta Take His Licks” appeared first on SOHH.com.

22 Savage Defends Ripping 21 Savage’s Rap Alias: “I Jacked Him Out Of His Name – He’s Gotta Take His Licks” : SOHH