Our Q&A With The Creators Of “Samurai Shin” OST 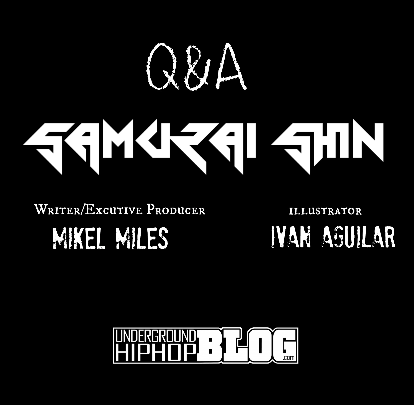 We have been getting a lot of complements/feedback recently soon after our Samurai Shin OST review post went live! Fans really enjoyed the read. And the theme is awesome. Who was the one who came up with the idea to make the Samurai Shin series?

Mikel Miles: First things first, thank you to the undergroundhiphopblog fans for their collective support. Now for the question; you said “who came up with the idea to make samurai shin comic book series?” Long story short, I had something written in a notebook a couple of years ago because i didn’t like the ending of the anime show called “Afro Samurai.” Later, I saw Ivan’s artwork on facebook, and I was impressed, so I contacted him on facebook about doing a comic book series. The rest is history.

Ivan Aguilar: YEP! that how it went lol.

When it came to selecting the Hip Hop to add for the Samurai Shin series, who was the person responsible for that? Also, we noticed the music is mad underground, you guys could have easily went with some stupid mainstream music, so much respect for running with the underground sound!

Ivan Aguilar: it was Mikel idea he approach me with the idea that Samurai Shin Series should be Hip Hop Influence.

Mikel Miles: Well, I went with something more relatable to the samurai shin comic series. That was the underground hip hop sound where there is more of a focus on storytelling and instrumentals.

Please breakdown the creative process of your Comic Book series “Samurai Shin”. How long did it take to complete and do you guys have any plans to release more?

Ivan Aguilar: We have tried several approaches to get our creative juices flowing, There would be days where Mikel would sent me a list of movies,mostly animation for me to watch and just try to get the feel or essence of these films, and somehow incorporate that into my illustrations or in the way I do the panelling and stuff. I would also spend some time reading a bit of japanese history as well,and try to get the costumes and the look of the era as real as I can portray them in drawing. But mostly, Me and Mikel would just be shooting out ideas and try to mold into this world and give it more depth and shape. It is still evolving and growing, and the spontaneity of our interactions is the key that would make this one unique and really out there.

Mikel Miles: What he said lol

Who are your Hip Hop influences?

Mikel Miles: Well, Armando, this soundtrack was heavily influenced by the “samurai champloo” soundtrack, which was produced by nujabes — rest in peace — , fat jon & force of nature with a little hint of afro samurai was produced by wu-tang clan member “RZA,” and i love both of those soundtracks a lot, so I wanted to match the sound as closely as possible.

But my influences are 50 Cent, Biggie Smalls & Nas, but i also listen to Lloyd Banks, The Game, Kendrick Lamar, J.Cole, Torae, Skyzoo & Slaughterhouse, Everyday. I would give new artist “WHO CAN SPIT” a chance to listen to. Also listening to this new kid called “A-F-R-O” dope lyricist by the way alright enough of me lol what about you Ivan

Ivan Aguilar: My main hip hop influences would naturally be the old school, like Run DMC, Bone Thugs and Harmony, and most especially Tupac, he was such a strong character, and deceptively smart and had a lot of heart,.He was quite a complex and poetic character and you can feel it in his music.

Mikel Miles: Man! i actucally didn’t know this haha that’s dope, I see Ivan taking it way back with the old school hip hop you got to love it armando.

Any possible music videos/animations for the series?, or are you guys just sticking with the online/physical prints?

Mikel Miles: There will be a short animation — we’re hoping it will be been posted on undergroundhiphopblog — but yeah, the trailer has already been created by Sheep Ninja, and he’s been working on that for the last 3 months. It will feature a song from the samurai shin soundtrack; the trailer will release on the comic book release date. two more animation trailers that will be coming in the upcoming months created by kynan justis and heymann kaydoe. I thank these three guys for putting their time effort into their animations. I’m really grateful for their work. there will be physical prints and it will be available on the samurai shin website coming soon.

Are any of the Hip Hop artists featured on this soundtrack have anything to do with the production on this Comic series?

Mikel Miles: Nah. they’re chilling at home waiting for the 1st issue of the samurai shin comic book! lmao, nah, but Kuro Silence,P.Soul,Chill $quad, Xia-Dawn, Jaymin Warren & G-Ammo all did a great job on the soundtrack.

Mikel Miles: I think its ivan time to answer this question lol.

Ivan Aguilar: lol Yeah, What me and Mikel have in plan with this project is to hopefully get some international recognition and get fans all over the world. We just want to share our story and reach as many people as possible, no matter the race or country.

Mikel Miles: OH! Actually I would like to give a shoutout to takashi okazki for creating the “Afro Samurai” manga back in 1998-2002 and then the anime that made its debut in 2007. I’d also like to thank Takashi Okazki for being one of the first Japanese manga creators to have African Japanese aka (Afro-Asain) characters to star in manga and anime. Ivan and I recreated or “remixed” one of his characters from Afro Samurai Named “Kuma,” but we made our character more evil and gave him a different bear mask, lol. but hopefully in the near future we can create anime of “Samurai Shin” and get a co-sign from him.

Here it is! Our most popular question! What is your definition of “underground hip hop?

Mikel Miles: My definition of underground hip hop — I only have 3 words for that, and i’m going do it in Coach Gregg Popovich style: “Heart, Soul & Brains.

Where can people find you on the web? Drop all the vital links

Ivan Aguilar: I would like to give a shoutout to my friends and family, and to the guys out their that are saying positive things about the comic, Thank you.

I’d also like to thank the guys who didn’t make the soundtrack but worked hard on their craft: AJB4, Woet Beats & AceisBack .

Also, once again, shoutout to the animators that put their time into this project: Sheep Ninja, aka Matt, Kynan Justis and Heymann Kaydoe.

This is my last shoutout I swear: shoutout to Undergroundhiphopblog fans and samurai shin fans that support this project and supporting us! Damn, its like i brought a list, lol! But if I didn’t shout you, call me out and make a diss record.

Ivan Aguilar: Can i say one more thing before we go?

Armando: Ya Go Ahead!

Ivan Aguilar: We think that it’s important that the quality of the story and art should get better with time, and we definitely like to take our time and make sure to keep everything tight as possible. We feel we still have a long way to go with this one story wise, and that we would be doing more chapters of this one as the story progresses and evolve.

Mikel Miles: That’s some real shit you said there Ivan, ya but keep supporting us, this is our first one so yes the story and art will progress in time but here we will give you guys a sneak peek.

Armando: If you guys havent downloaded the Samurai Shin OST its free download it now and Samurai Shin Issue #1  Comic Book ReleasesSeptember 23rd SUPPORT IT! Thank you letting me get a chance interview you guys.

Our Q&A With The Creators Of “Samurai Shin” OST : Underground Hip Hop Blog