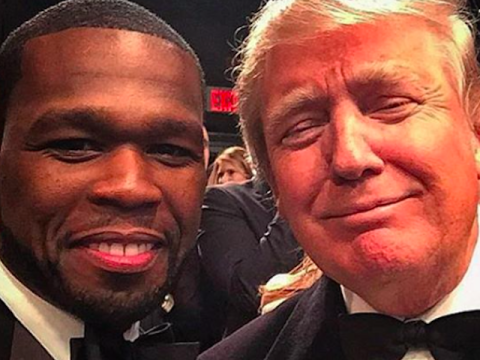 G-Unit boss 50 Cent is not ready for a Republican president. The comical rap star shared his anti-Donald Trump stance this week on social media.

Fif went to his Instagram page Thursday (September 22) and sent a direct shot at Donald’s run at the presidency.

Yesterday (September 21), King appeared at a Cleveland church to show off his support for the Trumpster.

The Republican nominee, who has record low support from black voters, has repeatedly touted King’s endorsement of his candidacy despite the controversy surrounding the boxing promoter. King was convicted of second-degree manslaughter in 1966. At Wednesday’s event, King described Trump as a candidate of “inclusiveness,” saying, “America needs Donald Trump. We need Donald Trump, especially black people.” Trump took the stage after King spoke, telling his supporters: “There’s only one Don King. Only one.” (People)